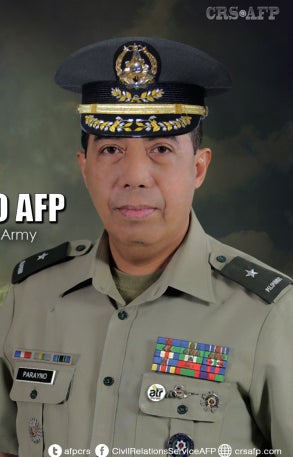 LUCENA CITY, Quezon — With President Duterte ordering the Armed Forces of the Philippines and the Philippine National Police to unleash hell on the New People’s Army rebels, this idea from a major general may have become moot and academic.

But as peace advocates would say, windows for peace should always be kept open.

Hours before President Duterte ordered an all-out war against the communist rebels and PNP chief Ronald Dela Rosa deemed peace talks with the rebels pointless, Major. Gen. Rhoderick Parayno of the Philippine Army’s Southern Luzon Command suggested an innovation:  He encouraged local officials, religious groups, non-government and civic organizations, as well as respected citizens to initiate the holding of localized peace talks between the NPA and the local governments in Southern Luzon.

“Any group, barangay officials, religious leaders or anybody who is credible in the community, who can touch base with the NPA rebels, would be welcomed to initiate dialogues that would open up opportunities to talk peace in the local level,” Parayno said in a press conference here Thursday.

Brig. Gen. Ernesto Ravina Jr., Solcom deputy commander, clarified that the military had no authority to initiate peace talks with local communist guerillas in their area of operations.

“The efforts for the holding of localized peace talks should be the initiative of the local government,” Ravina said. “But Solcom is ready to support the local peace talks.”

“No member of the CPP-NPA-NDFP will agree to localized peace talks,” Del Mundo said in an online interview in February.

But Quezon town mayors have been receptive to the proposed localized peace talks.

“The mayors’ league welcomes the proposal,” Mauban town Mayor Fernando Llamas, president of Quezon Mayors’ League (QML), said in a phone interview. He said the QML would immediately discuss the idea of
initiating local peace talks in the province.

“If there will be peace, business investors will come in and provide jobs to the people. Progress and developments will soon follow,” he said.

Mulanay Mayor Joselito Ojeda, former president of QML, said his town in the Bondoc Peninsula district would be the first local government unit to initiate holding peace talks at the grassroots level.

“We badly need peace. If we can achieve peace through the holding of local peace negotiation, then let’s do it,” San Andres Mayor Sergio Emprese said in a phone interview.  SFM