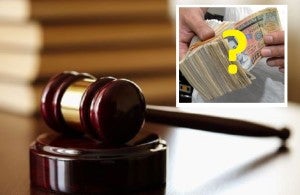 MANILA — The Sandiganbayan has dismissed the graft case against Department of Agriculture regional field unit director Eduardo Lecciones in connection with the alleged misuse of the fertilizer funds of two Cebu congressmen in 2004.

Lecciones is accused of conspiring with the two lawmakers to misuse their P3-million Farm Inputs and Farm Implements Program allocations when they endorsed the Kasosyo Foundation, Inc. for the fertilizer projects.

Prosecutors said Kasosyo did not go through public bidding and did not meet the qualifications under Commission on Audit rules.

In its latest resolution, the court granted Lecciones’ motion to dismiss that “essentially adopted” Cuenco and Yapha’s successful claim that unreasonable delay attended the investigation of the Office of the Ombudsman.

Like in the lawmakers’ case, the court said it took the Ombudsman 10 years and six months to indict Lecciones.

Although the prosecution claimed that Lecciones committed different acts from those of Cuenco and Yapha, the court said it failed to show this.

Since the three were practically subjected to the same Ombudsman proceedings, the court said there was no reason to sustain Lecciones’ case when it threw out the charges against his co-accused.  SFM