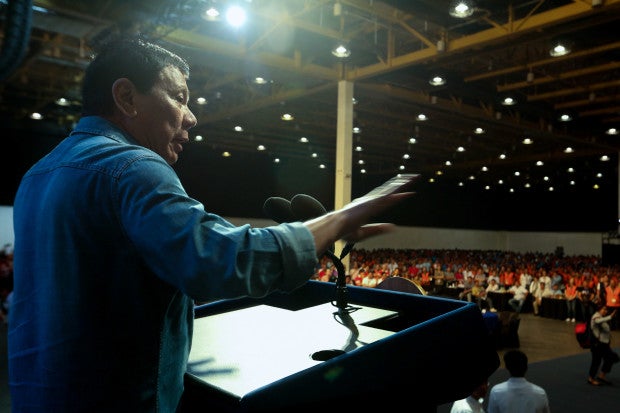 BANSALAN, Davao del Sur — President Duterte has ruled out peace talks with the communist rebels and declared that the police and the military can now pursue them.

He lamented on Thursday, that the NPA targeted non-combatants when they shot dead four members of the Scene of the Crime operatives of the local police in Bansalan, Davao del Sur, during an ambush.

“They (police officers) were only about to investigate. What color is there?” Duterte said.  The team of police investigators was sent to Bansalan to investigate a murder case.

He said he has ordered the Armed Forces of the Philippines to use all its assets, including the newly acquired jets and drop bombs on the rebels.

“Go ahead, flatten the hills,” he said, to the delight of the crowd present.

Addressing the NPA, the President said “Look at what you have done. Look at how the people responded.”

He said it was no longer viable to talk with the rebels because “nililigaw nila (they’re diverting issues in the talks, they’re muddling the talks).”

Duterte said the killing of the policemen was part of a “well- laid trap.”

In asking the military to pursue the rebels, the President said the peace talks have been suspended anyway.

“It’s totally absent so in the meantime, I will just ask  the armed forces and the police, just go ahead wage a war against them, anything goes for now,” he said.

Duterte said he would now allow the police and the military to use all available assets such as fighter jets and rockets.

Duterte said he had offered peace from the start but the rebels did the opposite.

“Well, I’m sorry this gory incident had to happen (ambush on police investigators). But I can assure everybody that the Armed Forces and the Philippine National Police will respond this time. I’m using everything,” he said.

“So what you receive you give also,” he added.  SFM