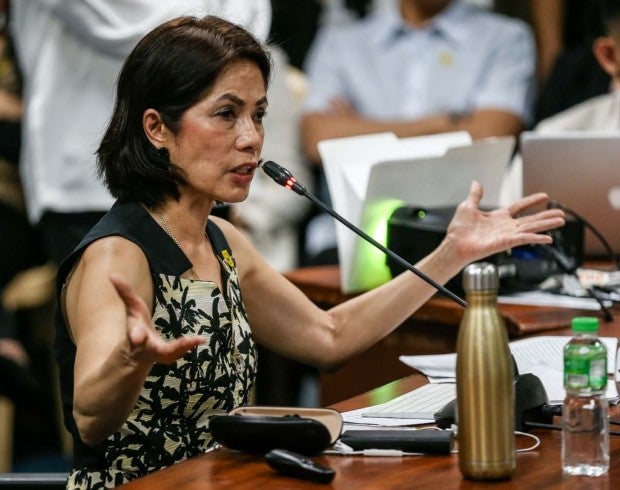 MANILA — A fresh wave of oppositors registered their protest to Environment Secretary Gina Lopez’s appointment, citing her lack of technical and scientific knowledge and alleging her disregard for due process in ordering the closure of mining operations in Mindanao.

At the continuation of the confirmation hearings by the Commission on Appointments on Thursday, Lopez faced questions on her fitness to head the Department of Environment and Natural Resources (DENR), with oppositors pouncing on her appointment of several advisers, her understanding of the mineral production sharing agreement, and her manner of ordering the shutdown of mining operations and cancellation of exploration contracts.

The Chamber of Mines of the Philippines, the sector by far most affected by Lopez’s policies, was most vigorous in its opposition, calling Lopez “unfit and unqualified to be the government’s lead regulator in natural resource development.”

Lopez earlier ordered the closure of 23 mines and cancelled 75 mining production sharing agreements, causing a shakeup in the multi-billion-peso industry.

“We want to be clear: the issue here today is not the mining Industry. The issue is whether or not Secretary-designate Lopez is the right person to head the DENR. We ask: is she competent to lead the DENR? Does she have the experience, education, impartiality and temperament to accomplish the Department’s objectives? To all these questions, we say no, no and no!,” said Ronald Recidoro, the chamber’s vice president for legal and policy.

He cited how Lopez “paints the mining indistry as environmental rapists that just take what they want and leave nothing but suffering and destruction in their wake” without considering the role of government regulation.

He cited how mining firms go through a strict process before starting operations.  “…Mining companies can’t just go into any area and mine any which way they want,” Recidero told the CA.

“Thus, if mining companies violate the law, is it not also a case of regulatory failure, where for lack of vigilance, manpower and/or political will, spillage, siltation, and pollution happens?,” he said.

He said Lopez has appeared to lack understanding of the law, citing how she had “struggled to define what an MPSA is.”

“Worse, she even claimed Presidential powers by declaring that she can prohibit mining even in non-proclaimed watersheds. One wonders if she is even familiar with all the other numerous laws that the DENR is mandated to implement or will be relying again on consultants,” Recidero said.

He also scored what he described to be a breach of due process in Lopez’s decision to shut down mines. He said Lopez preempted results of the DENR’s mining audit.

“By summarily ordering the closure of 23- and the suspension of 5 operating mines, and the cancellation of 75 MPSAs, Ms. Lopez bypassed legal and administrative processes, and blatantly disregarded the sanctity of contracts. The companies named were vilified on national television without any prior notice of their announced suspension or closure,” he said.

Lopez, meanwhile, rebuffed the chamber’s statement, saying: “There were violations… People have suffered.”

She also asserted that “due process was followed every step of the way.”

“I’m looking here for an economy where everyone will benefit… Use land in a way that assures our future. Why does it have to be gold and minerals and whatever?  Why not look at biodiversity, ecotourism?,” Lopez told the CA.

Christian Uytico, the first to present his opposition on behalf of a group of engineers and scholars, said Lopez “has inadequate technical and scientific knowledge to lead an agency” that has always dealt heavily with science.

“She is probably the only DENR Secretary who could not explain the details of the MPSA, which is a critical contract in mining,” said Uytico, the representative of the Stand FIRM (Filipinos for the Institution of Responsible Mining).

He was referring to Lopez’s appearance before the Commission on Appointments on Thursday, where she was asked to explain what the MPSA was all about.

“You also saw her need for the help of her advisers. For a simple question, she needs two or three advisers to help her answer,” he said.

Occidental Mindoro Rep. Josephine Ramirez-Sato, meanwhile, asked Lopez why she had appointed her own undersecretaries despite the lack of plantilla positions, using slots for Provincial Environment and Natural Resources Officers (Penro).

Sato said she respected Lopez’s prerogative to choose her own team, “but not at the expense of the organic personnel.”

But Lopez responded that she could not build a team based on whether or not it would cause hurt feelings.

“I need people whom I trust… The organic personnel do not have the capability to do what I want…. What about the work I want to do for our country?” she said.  SFM/rga