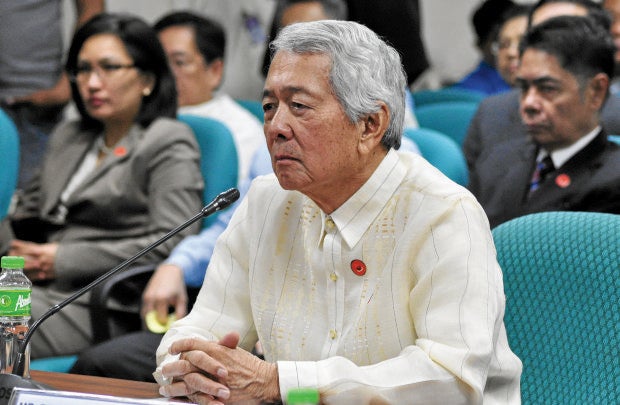 Foreign Affairs Secretary Perfecto Yasay listens to a question from a member of the Commission on Appointments during the hearing at the Senate on Wednesday, March 8, 2017. CONTRIBUTED PHOTO

It’s up to the courts to determine the citizenship of rejected Foreign Secretary Perfecto Yasay Jr. and any liability he may have, Chief Presidential Legal Counsel Salvador Panelo said on Wednesday.

Panelo also said he was saddened by the Commission on Appointments’ rejection of Yasay, who admitted under lawmakers’ questioning that he became a US citizen in 1986.

He can defend himself

Asked about the legal liability of Yasay, who served as Securities and Exchange Commission (SEC) chair from 1995 to 2000, Panelo said the matter would be left to the courts to determine.

“As a lawyer, he has his legal arguments to defend himself, and I think the proper forum would be the courts to determine whether he was an American citizen at one time in his life, or not as he says,” he told reporters.

Time for a haircut

Panelo also said he did not think that questions about Yasay’s citizenship would affect the Philippines’ relationship with other countries.

He said it would be the President’s discretion if he wanted to appoint Yasay to another government post.

Speaking to reporters after his confirmation hearing, Yasay said there was life after rejection by the CA.

The upside, he said, is he can now rest from his “difficult” and “hectic” work.

“Now I can have time for a haircut,” he said. —WITH A REPORT FROM JEANNETTE I. ANDRADE