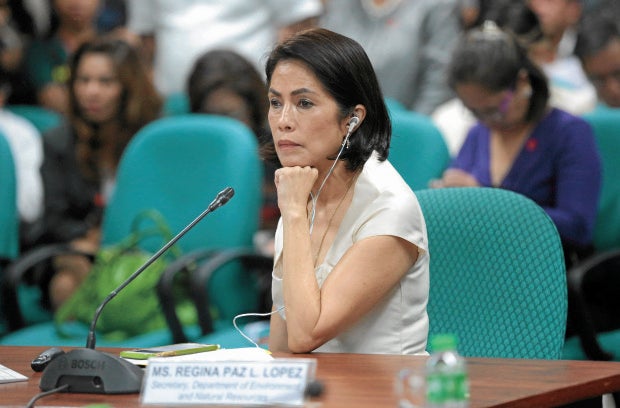 MANILA — Civil society groups backing the confirmation of Environment Secretary Gina Lopez has cried foul on new rules set by the Commission on Appointments allowing members to vote in secret if called for in a motion.

In a statement, multi-sectoral partylist Sanlakas said the rules, which began implementation on the date of Lopez’s confirmation hearing on Wednesday, was an apparent way for the Commission on Appoints to evade accountability and public backlash in the face of the divisive sentiment on Lopez who courted controversy with her recent orders to close 23 mines.

Sanlakas was among the green groups constituting the 3,000-strong rally in support of Lopez last March 1. They have also joined the Green Thumb Coalition in filing their recommendation for Lopez’ confirmation.

Lopez’ confirmation is facing 23 oppositions, from the Chamber of Mines, mining communities, geosciences academics, among others.

“It is no surprise that the CA would want to appease the minds of mining companies while escaping the scrutiny of the People, who are their supposed constituents,” said Sanlakas secretary-general Aaron Pedrosa.

“It is a shady thing that when we need transparency the most is when our leaders choose to hide behind closed doors,” Pedrosa added.

“Secret voting from the CA is alarming since individuals with ties to the mining industry are among the Commission’s powerful members, such as the CA Vice Chairman and San Juan Representative Ronaldo Zamora, whose family owns Nickel Asia,” Pedrosa said.

During Lopez’s hearing, Lopez had called out Zamora, telling him pointblank that his brother has been destroying mountains.

Meanwhile, the Concerned Citizens of Sta. Cruz, a group composed of Zambales residents adversely affected by mining operations, reiterated their support for Lopez.

“It is clear that there is much to be accomplished by the DENR under Secretary Lopez,” said Benito Molino of the CCOS. “We ask the CA to heed the call of the residents of Sta. Cruz and the rest of us who aresuffering daily  because of destructive mining.”  SFM