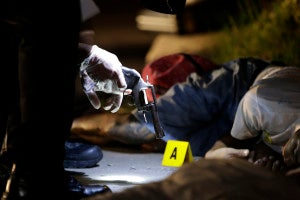 COTABATO CITY – A 9-year-old girl was injured while her parents were killed in an anti-drug operation carried out by a composite team of policemen, Army soldiers, and Navy personnel against several suspects, including the vice mayor of Maguing town in Lanao del Sur on Tuesday.

Nantes said the raiding team, armed with warrants, swooped down on two locations to conduct searches on the houses of couple Cairodin and Farhana Anto; Sultan Abdullah Pundugar; Baulo Anto; and Maguing Vice Mayor Gambao Abinal and his brother Hakim.

Nantes said while the raiding team was approaching the house of the Anto couple, Cairodin started shooting using a .45-pistol.

As a result, he said a brief firefight took place that led to the deaths of Cairodin and his wife, and the wounding of their daughter.

He said aside from the weapon, the raiding team also found several sachets of shabu inside the couple’s house and in the houses of Baulo and Pundugar.

In Lambayong, Sultan Kudarat, a village chair, his son, and a village councilman were arrested in separate anti-drug operations, also on Tuesday.

Supiter said that during a separate raid in the adjacent village of Timbalayan also on Tuesday, police authorities arrested 36-year-old Mohammad Tasil, a councilman in the village. Seized from Tasil was a handgun.

He said a third village official, identified as Butch Magango, the village chair of Barangay Sadsalan, had fled when authorities came to search his house. No drugs had been found in Magango’s house but the police discovered ammunition for a 9-millimeter pistol, Supiter said.  SFM