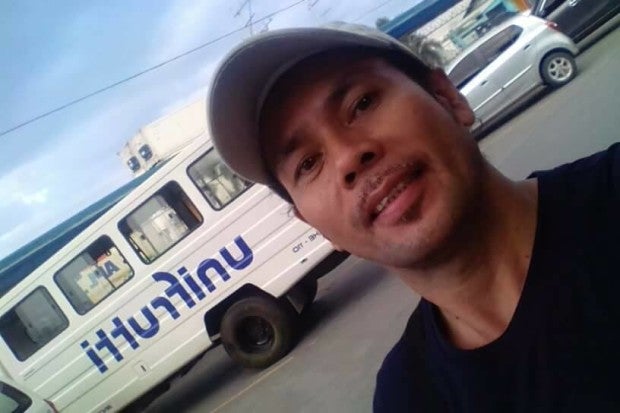 DAVAO CITY – Presidential sister Jocelyn Duterte’s dance instructor, who was supposedly killed many years ago on orders of then Davao City Mayor Rodrigo Duterte, posted a six-line message on Facebook on Tuesday, saying he was very much alive.

Retired SPO3 Arthur Lascañas, who appeared at the Senate on Monday, reiterated his claim that he headed the Davao Death Squad for Duterte and alleged that he killed hundreds of people on Duterte’s orders, including his sister Jocelyn’s dance instructor, Ruben Borja Baguio.

But Baguio, obviously irked at claims he had been killed for allegedly being a gigolo, wrote in an apparent message to Lascañas and another witness Edgar Matobato: “What’s your problem? Put your acts in order! Don’t you have something to say anymore?”

Baguio said he has been living peacefully until he was dragged into the investigation on the President’s alleged involvement in summary executions here when he was still mayor.

Baguio said he wanted to “clarify” to all that “it was not true I had been killed.”

“I earn my living decently so please stop the issue,” he added.

On it, he mostly posted or shared religious articles and quotes, aside from his photos and those of his family and friends.

He also had photos of him with Jocelyn and with Dionisia Pacquiao, mother of boxing champion Sen. Manny Pacquiao.

During the campaign period, Baguio – also a body-building enthusiast – posted pro-Duterte memes and was even photographed doing the Duterte fist sign.

Jocelyn, 68, told the Inquirer by phone that Baguio has been her dance instructor since 2007.

“From 2007 to present. He is my only DI,” she said, adding that they regularly meet at the only ballroom dancing venue in town.

Lascañas had been steadfast in his claim that they had killed Jocely’s DI upon then mayor Duterte’s order because he was dating his sister only for money.

He said he was certain about the job and that they buried the body of the DI inside the Laud quarry in Maa.

Jocelyn, who said she watched Lascañas give his testimony at the Senate on TV, concluded that it was all a farce and part of Senator Antonio Trillanes IV’s effort against his elder brother.

She advised Trillanes to get “certified true and correct” witnesses because the effort against the President has descended to the level of “showbiz” or a “telenovela.”

“You’re looking stupid…you’re wasting the people’s money given to you as salary. Good luck to your DDS sequel!,” she also said in an earlier statement.

The alleged killing of Jocelyn’s DI first made the news in September 2016 when Matobato testified before the Senate Justice and Human Rights Committee that the then mayor ordered him and other henchmen to chop him up.

He said the DI was only among hundreds of people killed by the so-called Davao Death Squad during Duterte’s terms as mayor.

Even then, Jocelyn had already branded Matobato’s claim as “a total lie and a serious lie.”

She said the exposé was part of the “politically-motivated plot” masterminded by Senator Leila de Lima against her brother.  SFM/rga