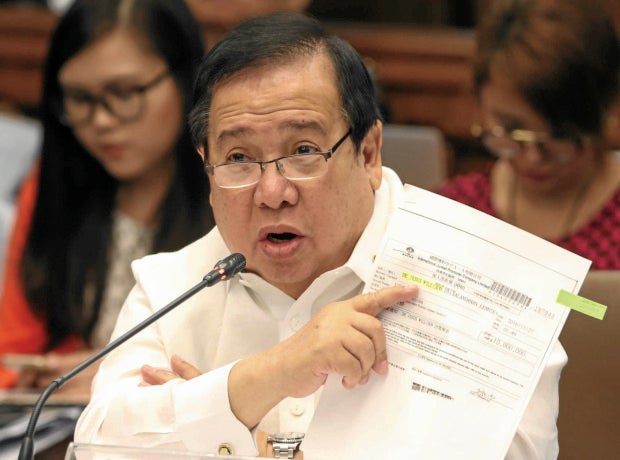 MANILA — Sen. Richard Gordon vowed on Tuesday to immediately bring to the Senate floor a bill seeking to create special police courts across the country to better arm the justice system in holding erring police officers accountable for their crimes.

During a hearing, the chair of the Senate committee on justice and human rights said he would readily send to the plenary for debates Senate Bill No. 1274 for the creation of special Police Law Enforcement Courts to handle police violations of the rules of engagement.

Gordon made the proposal in December during a series of Senate hearings that tackled police lapses, if not deliberate violations, particularly the Nov. 5 pre-dawn police operation that led to the killing of Albuera, Leyte Mayor Rolando Espinosa Sr. in detention.

“I would like to do this and sponsor this right away because they say the Senate keeps investigating and nothing happens… And I’ve been very cantankerous on the floor,” Gordon said at a hearing Tuesday morning.

Under his proposal, Gordon said the Supreme Court should create a special police court for each city and province across the country to prosecute police officers facing complaints of violations of constitutional rights or the Philippine National Police (PNP) Rules of Engagement.

Initially, Gordon said the high tribunal must designate such courts in at least 40 key cities and populous provinces.

The Supreme Court would then look at the volume of police-related cases that these courts receive and study the need for the creation of new and separate courts.

Among additional provisions that Supreme Court officials proposed to Gordon during the hearing were the designation of special DOJ prosecutors to handle cases of police abuses, a special Court of Appeals division to handle appeals to such cases, and the setting of a 30-day deadline for prosecutors to resolve cases filed against police officers.  SFM/rga

Read Next
Duterte set to sign EO on nationwide smoking ban ‘soon’
EDITORS' PICK
Biden vows to stand with Asia on freedom, hits at China on Taiwan
Climate Change Commission and Nestlé PH to discover sustainability-focused solutions
FDA reviewing COVID-19 vaccines’ EUA for booster shots
What’s at stake for every fighter at ONE: NextGen
NCR’s COVID-9 alert level may be downgraded from 3 to 2 soon — DOH
Legarda emphasizes role of ICC/IPs in nation building this IP month
MOST READ
Drivers now required to take driver’s education upon license renewal – LTO
Gordon to Duterte: You? Teaching me courtesy?
Marcos Jr’s ‘special diploma’ from Oxford: You can have it, too
Can Marcos Jr. be disqualified?
Don't miss out on the latest news and information.