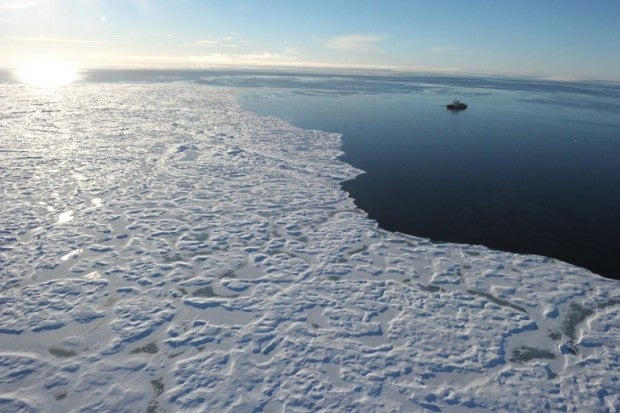 This Sept. 27, 2015 photo, shows an aerial view of the CCGS Amundsen, a Canadian reasearch ice-breaker navigating near an ice floe along Devon Island, in the canadian High Arctic. CCGS Amundsen is navigating waters that should be frozen over this time of year. Warming has forced a retreat of the polar ice cap, opening up a sea route through the Canadian Arctic Archipelago and connecting the Atlantic and Pacific Oceans for several months of the year. AFP

First the good news: summer ice cover is “virtually certain” to survive if average global warming does not rise more than 1.5 degrees Celsius (2.7 degrees Fahrenheit) above pre-industrial era levels, according to a study published in the journal Nature Climate Change.

“We estimate there is less than a 1-in-100,000 chance of an ice-free Arctic if global warming stays below 1.5 C,” James Screen and Daniel Williamson from the University of Exeter wrote.

That should come a relief to indigenous peoples whose way of life, and livelihood, depend on ice persisting through the summer months. Already today, their houses are literally falling into the sea.

For polar bears, the stakes are even higher, experts say.

With their total population reduced to around 26,000, polar bears would struggle to survive without the floating ice platforms from which they hunt seals and other prey.

On a global scale, several million square kilometers (miles) of white snow and ice reflect most of the solar radiation that hits it back into space.

Replace this giant mirror with deep blue ocean, and that heat gets absorbed instead, accelerating climate change.

Why a 1.5 C temperature limit?

That is the “aspirational” goal laid down in the 196-nation Paris climate pact, alongside a hard target of under 2 C (3.6 F), long identified as the guardrail for dangerous warming.

A 2 C rise would give humanity a coin-toss chance — “about as likely as not” — of keeping the North Pole white, Williamson and Screen reported.

The researchers compared different climate models of sea ice loss with actual changes over the last decade, using only those that provided the best match for their projections.

Despite year-to-year fluctuations, long-term trends in the Arctic are unmistakable: the 10 lowest ice extents since 1979 — when satellite data began — have all occurred since 2007.

A 1.5 C cap means ice cover would rarely dip below this level, the researchers said.

Sea ice today covers about 14 million square kilometers at its winter maximum, and five million at its summer minimum.

Without deep cuts in greenhouse gas emissions, the Arctic could see its first ice-free summers within two or three decades.

So far, the Arctic’s surface temperature has gone up by more than 2 C — twice the global average.

But the bad news is that even if scientists are confident a 1.5 C ceiling will, in theory, preserve Arctic ice, they are far less sure this goal can be achieved.

“Currently, we only have a few scenarios that get us there, and they are outliers,” Valerie Masson-Delmotte from the Pierre Simon Laplace Institute in Paris told fellow climate scientists gathered in Oxford last fall to discuss the 1.5 C target.

All but a few, in other words, of the hundreds of complex computer models plotting the rapid reduction of greenhouse gases that drive climate change zoom right past that benchmark.

“We may see the first year of 1.5 C above pre-industrial levels within a decade,” Richard Betts, head of climate impacts research at the Met Office Hadley Centre in England, told the same conference.