97-year-old twins leave world as they entered it: together 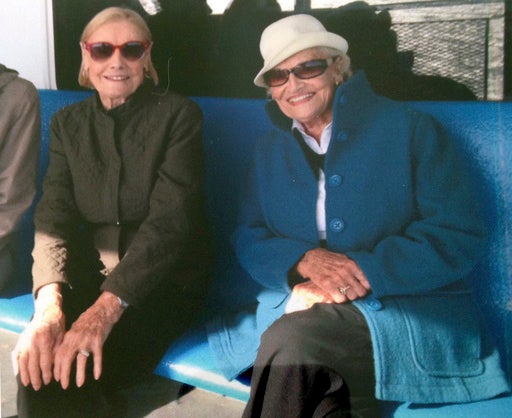 In this September 2015 photo provided by Susan Williams, Martha Williams, left, of East Providence, R.I., sits with her twin sister Jean Haley, of Barrington, R.I., on a ferry en route to the Massachusetts island of Nantucket. The 97-year-old twin sisters died Saturday, March 4, 2017, after they fell outside Jean’s home in Barrington and were stranded there during one of the coldest nights of the winter. A neighbor found the twin sisters the next morning. (Susan Williams via AP)

BARRINGTON, Rhode Island — Ninety-seven-year-old twins Jean Young Haley and Martha Young Williams left the world as they entered it: together.

The two women died over the weekend in freezing temperatures after both fell and became stranded outside Haley’s home following an evening out. Police say they believe Williams fell as she walked to her car Friday evening, and Haley fell as she tried to get inside to call for help.

Williams’ daughter, Susan, said Monday that she takes solace in knowing the twins entered and left life together, with one trying to save the other. She said it would have been incredibly hard for either sister to live without the other.

“It’s powerful, it’s astounding, it’s stunning,” she said. “And regardless of the pain we’re all feeling, at least they’re together.”

A neighbor found the sisters Saturday morning. Overnight temperatures in the area had dropped to as low as 11 degrees, with wind chills as low as minus 8.

Though twins, the two women had quite different personalities, Susan Williams said. She described her mother as pure and innocent, while her aunt could be more mischievous and humorous. They were both fun-loving and enjoyed dining at local restaurants together, where everybody got to know them.

“The two of them together made a whole, complete person,” she said. “They completed each other.”

The night they fell, they had gone out for dinner.

Mihailides said seeing the sisters always made him smile. He often asked them about the secret to a long life and he thinks their upbeat attitude was key.

“They were extraordinary,” he said. “A real class act.”

Martha Williams spent more than half of her life in Barrington and had been living for about seven years with her daughter in the Rumford village of East Providence. Haley lived on the waterfront in Barrington for more than 60 years — just a 20-minute drive away from her twin.

Haley’s family released a statement Monday saying the twins had a “great passion for life and were an inspiration to us all. They lived their 97 years to the fullest with charm, grace, kindness and style and will be remembered with fondness by the many people whose lives they touched.”