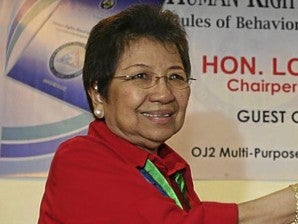 Police have busted a syndicate that recruits elderly slum-dwellers in Metro Manila to pose as victims of human rights abuses during martial law so they can each claim $1,000 from the $10 million in ill-gotten wealth  recovered from the Marcoses.

But in a strange twist, Rod Domingo, a human rights lawyer who represented more than 7,000 victims in a successful class suit before a US court, was initially tagged as one of the respondents in the fraud case.

The Criminal Investigation and Detection Group (CIDG) of the Philippine National Police (PNP) said it arrested eight suspects engaged in the practice of claiming checks from a fund meant to recompense victims of martial law abuses during the dictatorship of former President Ferdinand Marcos.

The money, the CIDG said, was part of the $10 million awarded by a Texas court in favor of the victims of human rights abuses. It was divided to P43,200 for each of some 7,500 claimants.

Chairperson Loretta Ann Rosales of the Commission on Human Rights (CHR) on Thursday expressed surprise over reports that some people have managed to claim compensation checks from the Marcos fund.

“I’m shocked by what happened. I’m doing my own investigation,” said Rosales, who has asked the CIDG to send her more reports and planned to talk with the Claimants 1081 and Rizal Commercial Banking Corp. (RCBC) to dig deeper into the matter.

The distribution of compensation for 7,000 human rights victims was completed in May, but Rosales sought an extension until October 15 to cover the remaining 500 victims, she said.

“I’ll have to go deeper. I have to find out what happened to the 500 victims and how much is left with the compensation money. I’ll continue with the investigation in my own personal capacity,” she said. “I’ll ask who has been making the withdrawals.”

But a copy of the first page of the charge sheet photographed by reporters showed that there were nine respondents, the ninth being “Atty. Rodrigo Domingo (at large).”

The AFCCD chief, Senior Superintendent Edgar C. Danao, said the CIDG had since “rectified” what he claimed to be an error.

He said there were actually only eight respondents in the charge sheet filed in the Quezon City Prosecutor’s Office on Wednesday night.

“We rectified that because we don’t have enough [basis] to establish his participation. We have to be very careful because he is a lawyer,” Danao said in a phone interview.

Asked what was the basis for including Domingo’s name on the list of respondents, Danao said investigators were looking into the lawyer’s possible connection with the Santiago couple, the alleged masterminds of the fraudulent operation.

Sought for comment, Domingo, who came to the inquest proceedings on Wednesday night “upon the invitation of some members of media,” acknowledged that he knew the Santiagos personally and that they were among the people who had helped establish the identities of the Marcos victims.

He said he had asked the CIDG investigators if he could talk to the Santiagos but his request was denied. He said he also asked to be shown the complaint but this, too, was denied.

Domingo said he could not understand why the CIDG investigators were being “antagonistic.”

“I am not protecting anybody… I am the one who has been giving out checks to the Marcos victims. If I had an interest in those checks, I would just get them,” he said.

The other suspects have tagged the Santiagos as the ones responsible for recruiting them and giving them fake documents in order to claim the checks under the account name “RA Swift FAO Human Rights Case,” Danao said.

They tried to cash the checks at an RCBC branch on Roosevelt Avenue in Muñoz, Quezon City, before they were arrested by the CIDG.

“The Santiago couple has been recruiting senior citizens in slum areas in Metro Manila to disguise themselves as legitimate victims of human rights abuses during the years of the Marcos dictatorship,” Danao said in a statement.

Based on the investigation, the Santiago couple gave the recruits fake postal IDs, with the names of legitimate victims and the pictures of the impostors on it. They would then present the documents to the bank teller when cashing their checks, the CIDG said.

After cashing the checks, the fake claimants would give the money back to the Santiagos, who would then pay them P1,500 each, the CIDG said.

Danao said the AFCCD was considering a deeper investigation of the case to catch other members of the syndicate behind the modus operandi.

He said the CIDG would ask the CHR for a list of legitimate claimants of compensation.

The AFCCD will also ask other authorities, including the chief counsel of the Marcos victims’ case in the United States, lawyer Robert Swift, if the Santiago couple had the legal authority to possess, distribute and cash the checks intended for the victims.

Domingo said instead of being a respondent, he should be one of the complainants because his primary concern was to protect the legitimate Marcos victims.

Strangely Danao said the same thing. “He should be among the complainants actually. But he didn’t want to.”

“They better hold firm whether I’m a respondent or not,” Domingo dared the CIDG.

“We condemn in the strongest terms the actuations of these persons supposedly claiming checks that do not rightfully belong to them,” Domingo said in a statement.

He said he had been informed by reporters on Wednesday night about the arrest of individuals who tried to encash checks belonging to qualified human rights victims. But since the CIDG refused to divulge the nature and extent of evidence against the suspects, he failed to issue a statement earlier.

Domingo said he, Swift and the CHR had long alerted the authorities about these “nefarious activities” in the early phase of the distribution of the compensation so they could prosecute the “lawless elements” victimizing the victims twice over.