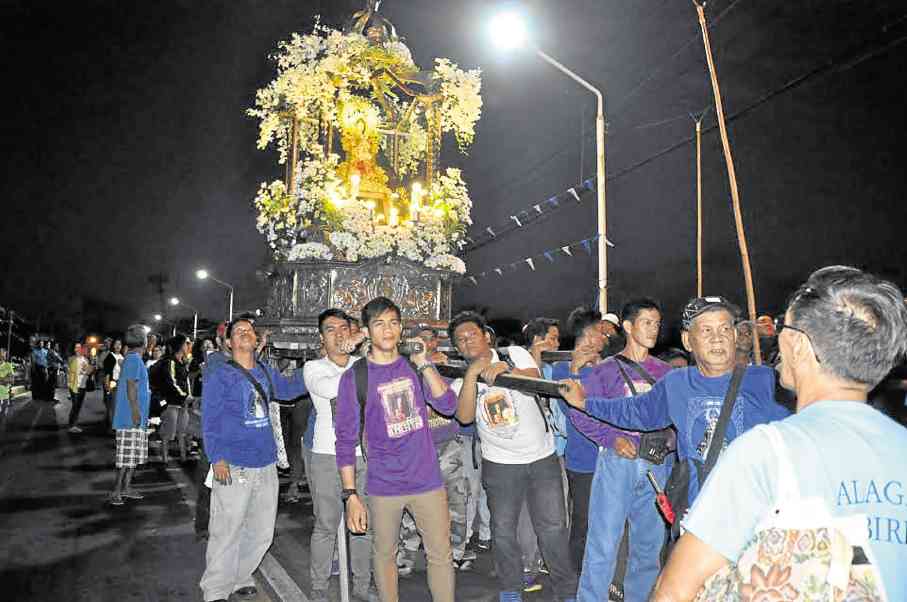 It was the first time that the 229-year-old image of the Nuestra Señora de Dolores de Turumba was taken out of the Pakil Shrine in Pakil town, and was brought to the province’s capital town of Sta. Cruz.

At the break of dawn, hundreds of devotees joined the “heritage fluvial parade,” which took over an hour of travel by boat, for the opening of the Anilag Festival on Monday.

“Anilag” is coined from “Ani ng Laguna,” which means harvests of Laguna.

The 9-by-11-inch (22.86-by-27.94-cm) image, believed to have been found off the waters of Laguna de Bay in Pakil in 1788, draws thousands of pilgrims almost year-round, according to Msgr. Jerry Bitoon, who heads the Ministry of Ecology of the Diocese of San Pablo.

Devotees are said to dance on the streets in honor of the Blessed Mother during the “lupi,” or special Catholic feasts observed in Pakil.

“The Birhen ng Turumba has long been associated with taking care of the lake,” Bitoon said in a text message.

In recent years, the Diocese of San Pablo organized the Lakbay Lawa, a fluvial campaign for the rehabilitation and protection of the Laguna de Bay, the largest inland body of water in the Philippines.

Bitoon said Anilag organizers agreed on the connection between the festival and lake conservation.

“Our creed is this: the sustainability of the bountiful harvest of Laguna depends on the integrity of the environment,” he said.