Speaker: Tax church-owned schools that do not cater to poor | Inquirer News

Speaker: Tax church-owned schools that do not cater to poor 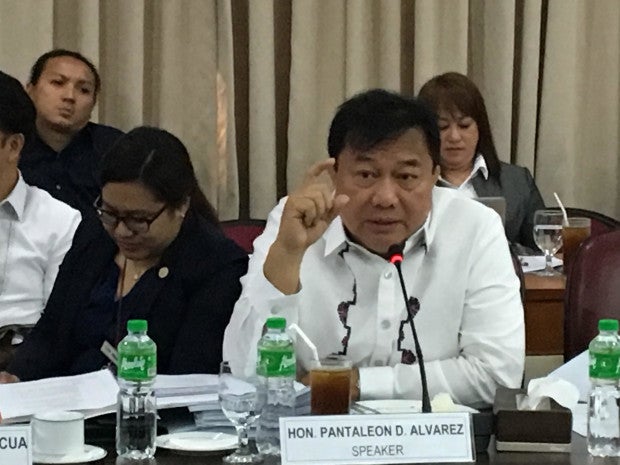 Speaker Pantaleon Alvarez explains why he supports taxing church-owned schools on March 6, 2017, during a hearing of the House committee on ways and means. (PHOTO BY VINCE NONATO / INQUIRER)

Speaker Pantaleon Alvarez, during the committee deliberations on the comprehensive tax reform package, has complained that most religious schools “don’t cater to the poor” and are “profitable businesses” anyway.

Alvarez said on Monday that the non-stock, non-profit status of such schools should be revisited, especially as they have been taking in students from higher-income families, expand operations, and hike tuition.

“I think it’s high time na i-tax ang dapat i-tax (to tax what should be taxed),” he said.

Ways and means committee chairman Rep. Dakila Cua chimed in that “if there is preferential treatment, we’ll have to address that.”

Socioeconomic Planning Secretary Ernesto Pernia said that “revenue from tuition [is] not taxed, but if they have revenue from commercial activities, those are taxed.” Finance Secretary Carlos Dominguez III also told Alvarez that the 1987 Constitution itself has barred the government from collecting taxes on religious-run schools.

For Alvarez, even the taxable income of religious groups, such as that from real properties and shares of stocks, should also be scrutinized.

During the hearing, Bureau of Internal Revenue Commissioner Caesar Dulay agreed with Alvarez’s request to furnish the House with religious institutions’ income tax returns for the past three years.

But, the tax chief asked to do so at an executive session, with Cua noting the confidentiality of taxpayers’ identities.

Under Article VI, Section 28(3) of the 1987 Constitution, “charitable institutions, churches… and all lands, buildings, and improvements, actually, directly, and exclusively used for religious, charitable, or educational purposes” are exempt from taxation.

At the sidelines of the hearing, Alvarez denied that he was raising this issue in response to the Catholic Bishops Conference of the Philippines’ criticism of the Duterte administration’s bloody anti-drug campaign and push to revive the death penalty.

Two party-list lawmakers from the House supermajority agreed with Alvarez’s sentiment during the weekly Ugnayan sa Batasan briefing but were mindful of the Constitution’s provision.

However, Batocabe noted that churches and religious groups could argue that “education is part of evangelization.”  SFM/rga