This 16-year-old Malaysian made his way to Everest, on his own | Inquirer News
Close
menu
search

This 16-year-old Malaysian made his way to Everest, on his own 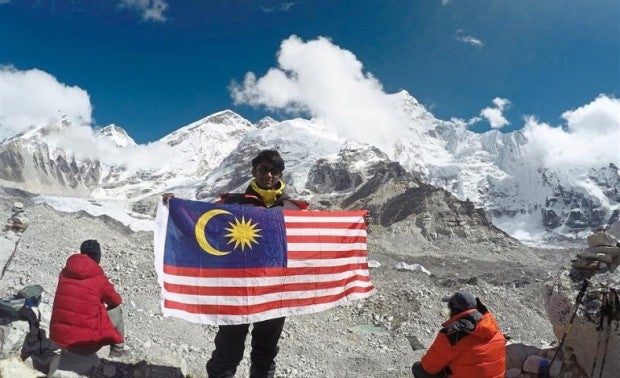 He made it … despite falling ill midway through the journey. Ishan pushed through and made it to Everest Base Camp. Photos: Ishan Siva Ramanathan

In 2015, Ishan Siva Ramanathan announced his intent to climb the world’s highest peak, Mount Everest, to his parents after they came out of the cinema hall having watched survival thriller Everest.

It didn’t matter that the movie told the devastating story of a group of climbers who had to fight for their lives after a catastrophic blizzard hit them – there were casualties, sadly – while they were on the mountain. The 16-year-old was determined to make the journey.

Ishan was awed by the footage of the mountain and emboldened by the challenge it presented and knew that he wanted to make his way to what he describes as “the most spectacular place on Earth.”

Understandably, his parents were thrown for a loop by his declaration. But when they realized that his immediate plan was to trek to the Everest Base Camp (EBC) – which at an altitude of 5,364m (3,500m lower the peak of the mount) was a somewhat more achievable challenge for someone relatively fit – they cautiously got behind the idea.

“My first instinct was to refuse. In fact I did say that I wouldn’t let him … not in my lifetime, at least,” says Yasodha Selvaratnam, Ishan’s mother.

“But when he explained that he would go only as far as base camp, I relented. Because of the fact that Ishan was so determined, we felt we had to support him through it. We made sure we booked a company that was experienced and had a good track record. We had conversations with the owner of the tour company several times and asked those who had used the company before and were pleased and relieved to have good feedback,” Ishan decided to climb for a cause and since he’d spent some months as an intern at the Institute for Democracy and Economic Affairs (Ideas) last year, he decided to use his climb to raise funds for the Ideas Academy, a secondary learning centre for stateless and undocumented children.

So on October 10, 2016, Ishan left for Nepal on his own. Upon his arrival at the airport in Kathmandu, he was met by the tour operator and another climber, John William Strode from the United States, who had also just flown in. There would be another two men – Johnson Lim, a Filipino and Andrey Garcia, a Brazilian –joining them the next day. Ishan wasn’t fazed at being the youngest of the four climbers. 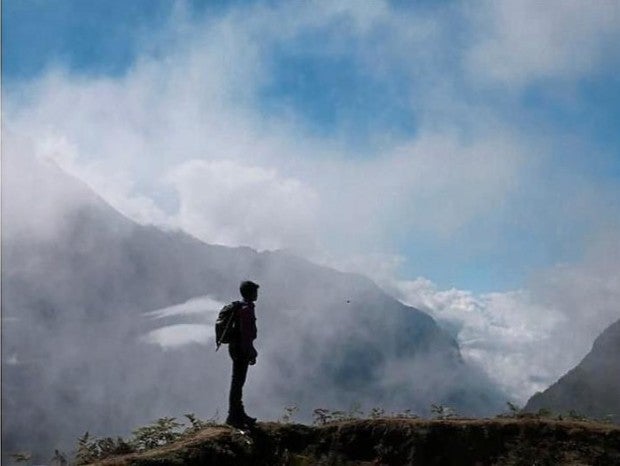 Ishan’s adventure to Everest Base Camp has been the best trip of his life.

“I wasn’t too worried. I was relatively fit as I play a lot of sport in school. I play tennis, basketball and football, and on weekends, I walk and hike. I was just worried about developing altitude sickness. That was the main thing on my mind,” he says, adding that he’d successfully made it to the peak of Mount Kinabalu when he was 14.

The first two days of his adventure were spent in the Nepalese capital Kathmandu, where the four climbers visited temples and heritage sites mostly to get acclimatized to the high altitude – it was 1,400m in Kathmandu itself. On the 12th, they left for Lukla (dubbed the gateway to Mount Everest) at the break of dawn, marking the start of his 10-day adventure.

The flight to Lukla, which Ishan describes as being “interesting,” was an adventure in itself.

“Our guide told us to use the word interesting instead of scary when talking about the flight. We left on a 12-seater plane and as the small aircraft sailed through a sea of clouds, the majestic peaks of the Himalayas emerged and it looked just like in the photos. It was amazing, but then came the landing at the Lukla aiport which has the shortest runway in the world – only 500m – that is carved into a mountain ridge (sitting perilously by a three-kilometre drop).

“Thank goodness we had a really experienced pilot because the strip is in between a concrete wall and the cliff. The margin for error is very small … overshoot a little and we’d hit a concrete wall; undershoot and we’d go down the cliff,” he explains.

Ishan claims that he wasn’t too worried though, as he had confidence in their pilot, to which his mother stifled a gasp, almost successfully. 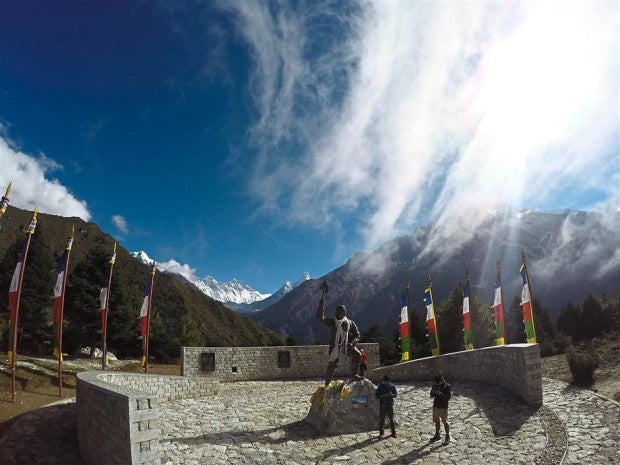 Ishan caught a glimpse of Mount Everest only on his fourth day trekking. This photo, taken near Namche (one of their pit stops along the way) shows a statue of Tenzing Norgay, the first person to ascend to the peak.

The four climbers began their trek the next morning and though the days were long and cold, the views were spectacular and well worth the effort. There were many highlights during the nine-day trek – charming villages, watching mountain yaks carry supplies and gas tanks to the villages along the way, meeting friendly villagers and fellow climbers, taking in the beautiful scenery along the way and of course sightings of the various mountains in the Mahalangur range of the Himalayas.

They got their first glimpse of Everest only on their fourth day of trekking and it was, as anticipated, quite spectacular. But it was an unexpected experience at a monastery about a third of their way up that gave them the extra push to reach their destination.

“We visited the (Dawa Choling Gompa) monastery … it’s kind of a ritual for climbers. The monastery has really strong energy and monks from all over the world come to visit or live there. We had the chance to sit in on one of the prayers during which I felt my leg tingling. I didn’t think much about it and assumed it was just pins and needles from sitting down for so long. But when we came out, our guide asked us if we’d felt anythng unusual during the prayers. When I told him about the tingling and the others reported similar experiences, he smiled and said what we’d felt was the energy from the monastery. That was something totally unexpected and special,” he shares.

After Tengboche, the journey became considerably more challenging not just because the route became steeper but because the altitude began to have an effect on the climbers.

“Up until Tengboche, I was very aware of my surroundings and I was taking a lot of photos. But after we left, I found it difficult to focus on much else other than my next step and I didn’t take many photos. The altitude was starting to have an effect on me,” says Ishan. 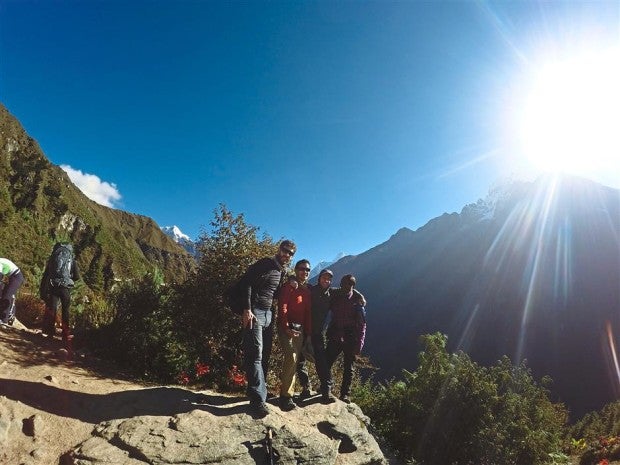 Ishan with his climbing buddies at the end of Day 5, an extremely gruelling day. Here, they are posing with the peaks of Lhotse and Nuptse in the background.

And as if the altitude wasn’t enough to deal with, Ishan soon fell ill with a fever and flu. Thankfully, they’d reached their next pit stop and he could rest for the night after taking some medicines – one of his fellow climbers was a doctor and had some drugs with him. The next morning, though still ill, Ishan had to force himself to push on as they had to keep to their schedule.

“I had no choice … we had to move on. And I was determined to keep going as I didn’t want to be left behind. We walked about nine hours that day, including brief rest stops at a few places. I was just so worried that I wouldn’t be able to continue on to base camp. That was my biggest fear from the start,” says Ishan.

This fear was amplified when one of his fellow climbers, Johnson, fell desperately ill due to altitude sickness at the final leg of the trek and had to stop.

Thankfully, he pulled through and made it to EBC on October 16 where he snapped a photo with the Malaysian flag which he carried along with him.

“It was worth it. I felt a range of emotions … relief, contentment and just sheer joy at having made it. But to be honest, it only fully sank in a few days later when I was recollecting my journey. I couldn’t believe I did it … it was definitely the best time of my life and certainly the best adventure,” he says, with an unmistakable grin of achievement.

Also, Ishan managed to raise slightly more than RM17,000 for the Ideas Academy. 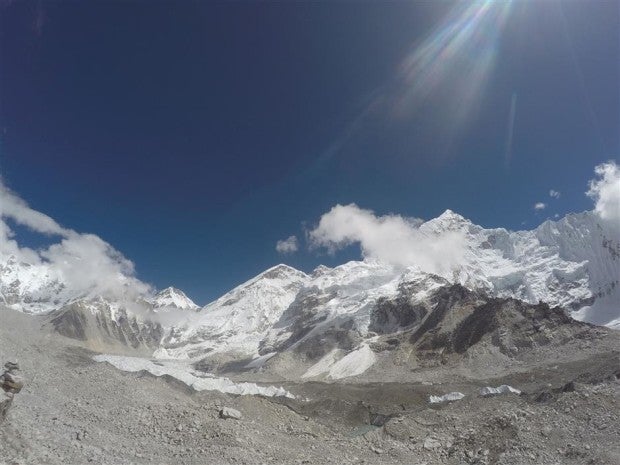 Ishan Siva Ramanathan may only be 16 but he achieved his goal to reach Everest Base Camp on his own (with a guide and friends he made along the way), proving to himself that sheer will and determination can translate to success.

Ishan admits that he is by no small measure inspired by his grandmother, Mahamalar Ramanathan, who at 79 is travelling the world, one mountain at a time, the latest being Japan’s Mount Fuji which she climbed a year and a half ago.

He has also his parents to thank as they not only financed his trip but allowed him the freedom to chase his dreams.

“I want him to be independent too. Many children these days tend to be over-parented,” says Ishan’s father, Siva Ramanathan.

“They have maids, drivers and a whole host of other people to help them and they end up unprepared for the real world. This was one of the reasons we decided to send Ishan to boarding school (Kolej Tuanku Jaafar in Mantin, Negri Sembilan). This trip was a big risk and a lot of people warned us against it but we decided to let him do it.”/rga