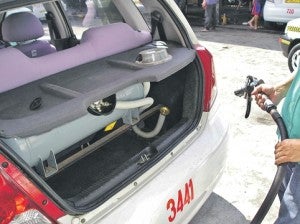 There are many ways for liquefied petroleum gas (LPG) to leak out of tanks, almost all of them the result of procedural shortcuts and inappropriate use of materials.

1. Always allow for expansion of LPG in the tanks. Never fill up above the 80-percent filled-up mark, to allow for the natural expansion of liquefied petroleum gas as it expands from liquid state to gaseous. This allowance is called the dead space volume. Too little space for expansion may cause the seals and fittings on the tank to burst.

2. Safety standards set the maximum LPG content in a tank at 80 percent, to allow the LPG fuel enough space to safely expand with increasing temperatures. Force-filling the tank to more than 80 percent capacity increases the risk of seals, gauges and fittings to burst and leak fuel.

3. Two safety violations are evident here: A) The filler valve has been placed inside the trunk, and B) the LPG receptacle’s nozzle requires an adaptor (extender). LPG adaptors are considered a safety hazard.

4. The same zeal to seal should be applied to electrical wirings, especially so if these are near an LPG tank.

5. A fuel line with two incompatible metals, such as copper and brass, welded or joined together can be a recipe for disaster. Over time, the constant and sometimes jarring movement of running cars may cause these fuel lines to “work harden,” corrode and separate, spilling all the tank’s contents into the trunk and the passenger cabin.

6. Exposed filler valve (without cap) increases the risk of LPG leaking into the trunk, and hence into the passenger cabin.

7. Another exposed fuel line. The entire LPG fuel line should be sealed or insulated.