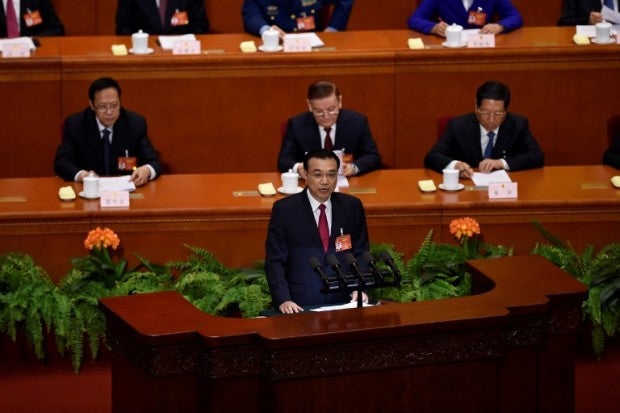 “We will resolutely oppose and contain separatist activities for Taiwan independence,” Li said in a speech opening the annual session of China’s rubber-stamp National People’s Congress.

“We will never tolerate any activity, in any form or name, which attempts to separate Taiwan from the motherland.”

He later threw doubt on the “One China” policy — a tacit acknowledgement of China’s claim to the self-ruled island — suggesting that the decades-old diplomatic formulation was up for negotiation, which drew protests from China.

Li, however, extended the usual cautious olive branch across the Taiwan Strait, saying China would continue efforts to increase linkages with the island, which have included rising cross-strait investment, daily direct flights and increased tourism between the two territories.

“People on both sides of the Taiwan Strait should keep in mind the greater interests of the nation,” and work towards the “reunification of China.”

In Hong Kong, fears have grown that Beijing is increasingly interfering in the governance of the semi-autonomous financial hub, sparking calls by some activists for self-determination or even independence.

Such calls have riled Beijing, and Li shut down any hope of Hong Kong independence.

“The notion of Hong Kong independence will lead nowhere,” he said.

Li’s annual report to the highly choreographed congress is akin to a state-of-the-nation address highlighting key government priorities for the year, which are then typically parroted in subsequent delegate meetings.