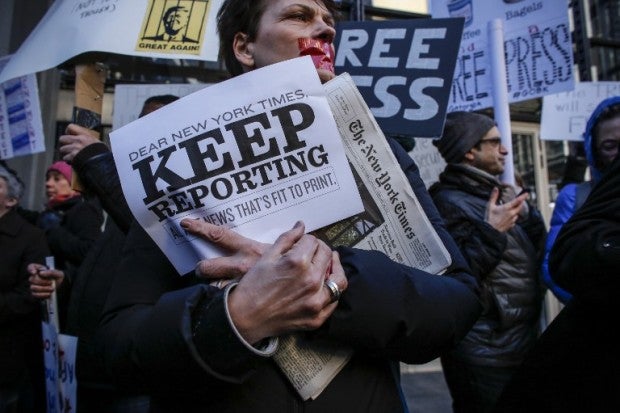 A woman covers her mouth with tape as people take part in a protest outside the New York Times on February 26, 2017 in New York./ AFP PHOTO / KENA BETANCUR

Facing a White House which has been unrelenting in its attacks on the media, news organizations are struggling to find the right balance in covering President Donald Trump’s administration.

Reporters and media groups are increasingly finding they are part of the story, after Trump’s denunciation of “fake news” and his branding of media groups as “the enemy of the people.”

Most news organizations have promised to fulfill their responsibility to report aggressively, without being vindictive.

“The goal is to be tough, but to be fair. The fairness part is an important part of the equation,” said Richard Benedetto, an adjunct professor of journalism at American University who was a White House correspondent for USA Today.

The White House may have some justification for claiming the press is unfair: an NBC survey last month found 53 percent of Americans believed the media were exaggerating problems in the Trump administration.

“There seems to be a lack of concern about being fair,” Benedetto said. “It’s become kind of personal.”

Before Trump’s inauguration, Politico writer Jack Shafer said the press “ought to start thinking of covering Trump’s Washington like a war zone, where conflict follows conflict, where the fog prevents the collection of reliable information directly from the combatants, where the assignment is a matter of life or death.”

Reuters editor-in-chief Steve Adler said the news agency planned to do its job in Washington as it does in other countries where governments are hostile to the press.

The agency responds to difficult conditions “by doing our best to protect our journalists, by recommitting ourselves to reporting fairly and honestly, by doggedly gathering hard-to-get information — and by remaining impartial,” Adler said in a January memo to staff.

Karen North, a professor at the University of Southern California’s Annenberg School, said objectivity has become complicated as more journalists  feel a need to connect with readers by offering personal thoughts on social media.

North said some reporters feel a need to rebut the president on his favorite platform, Twitter.

“We have the president speaking directly to the people through Twitter,” North said.

In the fast-paced Twittersphere, she said, reporters are not just churning out facts but “they’re also putting out their opinion through social media.”

North noted that news organizations are also struggling for ways to keep the attention of their viewers and readers.

“Especially with the internet, with digital media, news has to compete with entertainment,” she said.

“So there’s a huge mandate now for news to be entertaining or at least to be engaging in a way that draws attention.”

New York Times public editor Liz Spayd acknowledged that some reporters in their Twitter messages during the campaign may have gone “over the line” and cast doubt on their objectivity.

Trump has tested the limits of the media meanwhile not only by attacking the press as “dishonest,” but by stretching or ignoring facts about the economy, crime, and the probe into his own circle’s contacts with Russia during the campaign.

There are no shortage of opinions on how the press should deal with the Trump problem.

Some analysts say the media should turn the other cheek, others say they should boycott or ignore Trump’s efforts. Some news organizations are stepping up their investigative efforts.

Nic Dawes, a former journalist who now works for Human Rights Watch, says the news industry has a difficult task in dealing with an administration hostile to the press.

Trump is seeking “to undermine the basic information infrastructure of democracy. His ultimate target is accountability in the largest sense,” Dawes said in a blog for the Columbia Journalism Review.

“The war for freedom of the press in the Trump era must be fought on many fronts,” Dawes wrote.

“If journalists insist on appearing neutral, they will avoid asking hard-edged questions or calling a lie a lie.”/rga