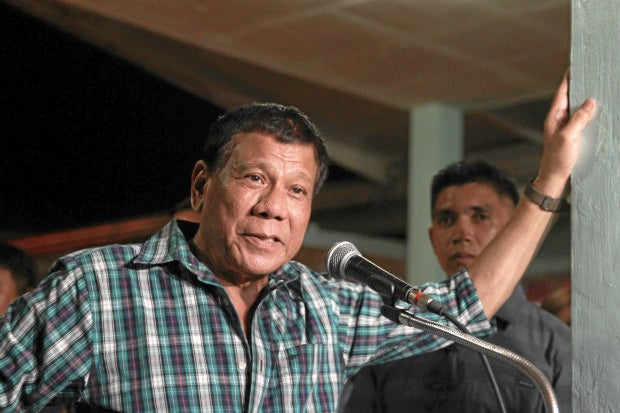 President Rodrigo Duterte listed what his peace adviser described as the President’s “wishes” before the government resumed peace talks and reinstated a truce with communist rebels—for the rebels to release their captives and stop collecting revolutionary taxes.

Jesus Dureza, Mr. Duterte’s top peace adviser, said they were not conditions but the President’s wishes.

In a speech in Cagayan de Oro City on Friday, Mr. Duterte said the two initiatives that he wanted the rebels to take—releasing captives and stopping tax collection—would be taken as signs of sincerity on their part.

“I’m ready to resume the ceasefire again,” said Mr. Duterte. “But this time, I want it to be sincere,” he said.

“Back then, there was a ceasefire but my soldiers were killed,” the President said.

He was referring to the killing by rebels of three soldiers in Malaybalay City, Bukidnon, at the height of a truce between the military and the New People’s Army (NPA) which Mr. Duterte cited in his decision to end the ceasefire with the NPA.

“That’s so difficult. But I’m ready for different kinds of talks,” he said.

Asked about his plans for peace, Mr. Duterte said something is being done which he could not discuss yet.

The President, however, said unless rebels released all soldiers and civilians they are holding captive and stopped forcing businesses to pay revolutionary tax, “we’ll never meet each other halfway.”

“It just embarrasses the government. They give us their word but it doesn’t bear any fruit. That’s very difficult,” he added.

“There should be no preconditions on the negotiating table,” he said.

Several factors would determine if peace talks could resume, added Dureza. He did not elaborate.

In his Cagayan de Oro speech, the President waxed poetic when he talked about the peace talks. Rebels, he said, must remove hate from their hearts to bring peace to the land.

The NPA killing of three soldiers in Malaybalay, he said, was proof of hatred in the hearts of rebels.