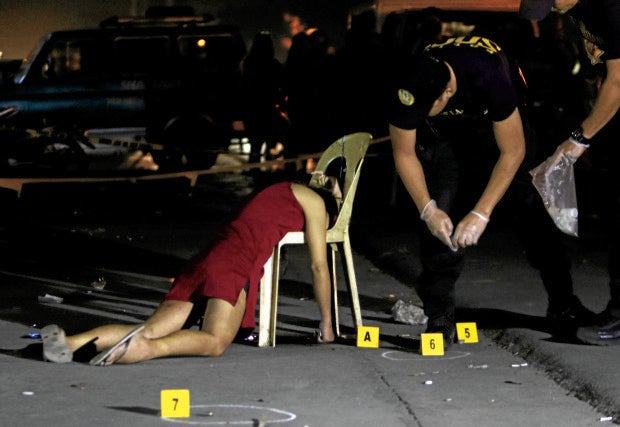 Even with the suspension of the government’s antidrug campaign, bullet-riddled bodies continued to turn up on the streets of Quezon City, with five people killed overnight in separate shooting incidents.

The Quezon City Police District (QCPD) said a businessman was filling the tank of his motorcycle along Zabarte Road when he was shot dead by an unidentified gunman.

According to the QCPD, Paul Michael Reguera, 33, was at Total gasoline station around 6:40 p.m. on Friday when the suspect approached him and pumped a bullet into his head. The gunman then fled on  a motorcycle.

Less than five hours later, Christina Padual and a man identified only as Alvin were also gunned down by unidentified suspects who fled on three motorcycles.

The victims were shot dead in front of a beerhouse on Commonwealth Avenue. The police recovered two rolled-up aluminum foils with suspected methamphetamine hydrochloride or “shabu” from the woman.

Police reports said the suspects shot dead the sleeping Lorna Adalid, 56, and Mark Astrologo, 22. A woman, who was with her two sons in an adjacent room, told the police that the suspects looked for Adalid’s son, Francis, but he had already escaped by destroying the roof of the house.

The gunmen then fled in  a white van.

With the rising number of the so-called deaths under investigation in the city, Chief Supt. Guillermo Eleazar, QCPD director, said his team would enhance efforts to lessen the killings.

“It is the responsibility of every police station to prevent the deaths by placing several checkpoints and encouraging curfews in their area,” Eleazar said, noting that Oplan Sita would be strengthened, as most killers use motorbikes as their getaway vehicles.

“We will also work harder to investigate the cases that have already happened,” he said.

With the anticipated revival of the government’s campaign against drugs, Eleazar said the QCPD would reactivate its antidrug units to lead the operations.

Eleazar said the QCPD would employ the same operatives under the disbanded District Anti-Illegal Drug (DAID) units and their station-level counterparts.

He said these officers were already vetted, as he had removed all previous antidrug operatives in QCPD when he took office in July.

“But we will still continue evaluating them,” he said, noting that the QCPD had been doing its “internal cleansing” alongside the drug war.

The ranking officer said Oplan Tokhang was dropped due to its “tainted” image.

“This time, the police will work directly on drug enforcement. There will be no more pleas for surrender,” Eleazar said. “Only the local government will continue efforts to encourage surrenderers and rehabilitation.”