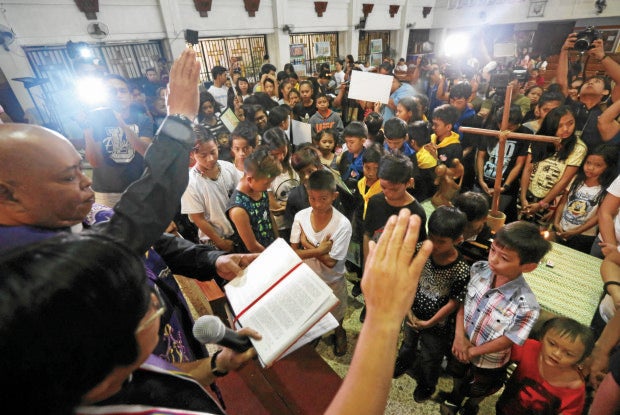 GATHERING THE THREATENED FLOCK A prayer service calling for a stop to extrajudicial killings linked to the drug war and campaigning against the Duterte administration’s move to lower the minimum age of criminal responsibility gathers children at the Iglesia Filipina Independiente Cathedral on Taft Avenue, Manila, on Saturday.—Marianne Bermudez

Like in any war, secrecy is a primary weapon.

And so Norma Dollaga can only disclose this much: For now, there are six small parishes involved in Metro Manila, and as of last week they have been providing shelter to 20 people from the slums, including a teenage boy who survived a massacre.

Their initiative quietly began in October last year, when the death toll of President Duterte’s bloody crackdown on illegal drugs stood at around 3,700.

Today, with the chilling body count reaching over 7,000, the unusual “ministry” launched by a network of churches is hoping for the best but bracing for the worst, with Mr. Duterte recently announcing the resumption of police operations against drug suspects after a monthlong suspension.

Dollaga is one of the cofounders of Rise Up for Life and for Rights, an ecumenical alliance campaigning against extrajudicial killings (EJKs) being linked to the narcotics war since they have targeted mostly drug users or smalltime pushers.

“One of our partner priests declared that he had these people (involved in drugs) wanting to change their lives and he was offering sanctuary to them,” said Dollaga, a Methodist deaconess, recalling how the Rise Up mission began.

“It’s sad. If a farmer-leader is killed, the whole community is paralyzed with fear and there’s sympathy. But if it’s a suspected drug addict who’s killed, there’s no sympathy until the community realizes that he was in fact executed,” Dollaga said. “We realize the truth that is being exposed by the stories of the poor. The cry of the poor in these situations compels us to cry for social justice.”

She is also the current secretary of the Association of Women in Theology as its secretary, and also a member of the Board of Ecumenical Voice for Peace and Human Rights in the Philippines.

“Whether we are afraid for our lives or not in providing sanctuary, the same thing will happen to us. So we might as well do the better thing. It’s imperative in your faith and your humanity,” she told the Inquirer in an interview last week.

The alliance, like critics of President Duterte’s brutal approach, insists that rehabilitation, counseling and community involvement is the better, lasting path to solving the drug menace.

The Rise Up organization also includes the Promotion for Church People’s Response, the National Council of Churches in the Philippines, the Permanent Commission on Social Mission Apostolate of the Redemptorist Missionaries, Contak Philippines, Kasimbayan, and other community-based groups.

Also a partner is the Redemptorist Church in Baclaran, Parañaque City, where the group mounted a photo exhibit in December showing EJK victims as they lay bleeding on the streets. The exhibit was timed with the dawn Masses leading to Christmas.

While the community can serve as the “best refuge” for drug users, many have since sought the help of Rise Up as they felt threatened in their own neighborhoods, Dollaga said.

“Usually, we identify those who we think are in danger, then we talk to them and the priest of their parish. We really assess if the person’s life is really in danger,” she added.

Most of those being given sanctuary are drug dependents who learned that they had been included in the so-called watch lists drawn up by local governments under the Oplan Tokhang campaign of the Philippine National Police.

They include a minor who survived a “vigilante-style” shooting at a street party in December which killed seven people, three of them also teenagers.

“We do ask them to be honest and say if they used illegal drugs or did anything bad. You’ll pity them,” Dollaga said. “We tell them: ‘This should not end with the funeral of your loved one. We should rise up together in fighting drug addiction and addressing its causes.’”

Rise Up is also documenting cases of drug-related killings and human rights violations. So far, it has documented more than 30 cases mostly in Quezon City and Caloocan.

Aside from counseling, it offers free acupuncture sessions to drug addicts who want to start a detoxification regimen, as well as livelihood programs. One parish, for example, has taught them how to make religious figurines.

These efforts are so far centered on a community in northern Metro Manila, where some of the drug users sheltered by Rise Up are staying.

“We’re planning a medical mission as part of our wellness ministry. That will take up more funds so we’re still planning for that,” Dollaga said.

A Catholic priest has also offered to help facilitate counseling sessions for those suffering from trauma, while other human rights groups are providing training in documentation.

Dollaga admitted that the protection would not be permanent, because “more importantly, we want to empower the communities to be sanctuaries themselves.”