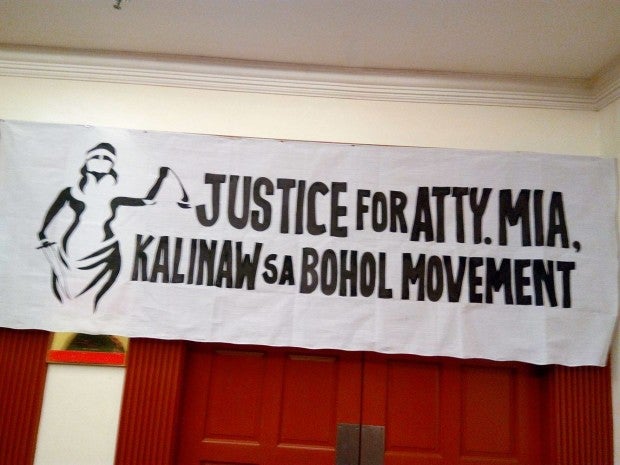 Representatives from various sectors in the launching of “Justice for Atty. Mia Kalinaw sa Bohol Movement” to call for speedy justice for the killing Atty. Mia Manuelita Mascariñas-Green and to end impunity in the province of Bohol. Leo Udtohan/Inquirer Visayas

TAGBILARAN CITY, Bohol- Various organizations in Bohol have formed an initiative to push the police to give justice to the death of lawyer Mia Manuelita Mascariñas-Green who was killed in front of her three children and nanny last Feb.15.

The Justice for Atty. Mia Kalinaw sa Bohol (peace in Bohol) Movement, was formed on Friday to put pressure on the police to solve the killing of Green and other unsolved crimes in the province.

“The call for the speedy justice for Mia is connected to the seeds of impunity that is an obstacle to attain justice not just for Mia but for many cases here in Bohol, our peaceful Bohol,” said Pat Ruiz, a board of director of the Bohol Nature and Conservation Society (Bonaconso).

Ruiz was one of the conveners of the movement which included representatives from civil society groups, the religious sector, the academe and members of the Integrated Bar of the Philippines (IBP) as well as friends and relatives of Green.

Green was driving home with her three children aged 10 and two-year-old twins and a nanny in the afternoon of Feb. 15 when she was waylaid at the corner of H. Zamora and J.A. Clarin Streets in Dao District in Tagbilran.

The gunmen then fired at the lawyer while her children watched in horror at the backseat of the vehicle.

Gonzaga was tagged as the mastermind while Benegi-an was one of the gunmen.

Green was the lawyer of the civil and administrative cases filed against Gonzaga by the suspect’s mother-in-law, Conrada Blomqvist, in an attempt to recover her hotel and van that were taken by Gonzaga.

The hotel is sitting on a 1,858 square-meter prime lot located at Ester A. Lim Drive, Purok 6, Barangay Tawala, Panglao where most of the resorts in Bohol are located due to its pristine white sand beach.

“The province will remain dangerous as long as justice remains elusive for Mia and other victims of impunity. So, we should work together to correct this because without this justice will just be in vain,” she added.

Ruiz said she was dismayed of the possible lapses and how authorities handled the supposed hot pursuit operation against the suspects.

“For us, our conclusion is the police did not do enough, did not do its job efficiently,” said Ruiz.

Taliño also ordered to get the suspects “dead or alive.”

A P600,000 bounty for information on the whereabouts of the suspects was offered by the Green family and various groups.

Ruiz said they don’t agree with the claim of the police that the case is considered solved since the suspects have been identified.

She pointed out that the police failed miserably in arresting the suspects.

She pointed out that the movement will serve as “pressure group” to demand for accountability of those responsible of the murder of Green.