No peace talks as long as NPA rebels ‘full of hate,’ says Duterte 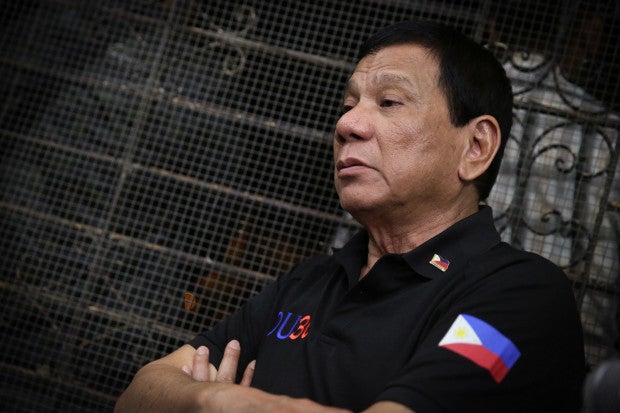 President Rodrigo Roa Duterte announces that he will suspend the peace talks with the National Democratic Front (NDF) as he answers queries from members of the media while visiting the grave of his mother Soledad ‘Nanay Soling’ Duterte at the Davao Catholic Cemetery in Davao City on Feb. 4, 2017.(Presidential photo by KARL NORMAN ALONZO)

Duterte his decision to scrap peace negotiations last month was partly based on an attack by the New People’s Army (NPA) on three soldiers. which happened even before the rebels terminated their unilateral ceasefire.

The soldiers had 76 gunshot wounds, which Duterte said showed the communist rebels’ level of hatred. That was why he got so angry.

“How can you do that to a Filipino?” he said. “You know, that indicates hatred. If they are like that, you are full of hate. Then we cannot talk about peace.”

One bullet should be enough to bring down your enemy, he said.

Duterte made his statements to reporters after his visit to the wake in Cagayan de Oro of two slain soldiers.

The soldiers, who belonged to the 58th Infantry Battalion of the 4th Infantry Divsion were killed in combat with communist rebels in Misamis Oriental earlier in the week. Four other soldiers from the same unit were injured in that clash.

The National Democratic Front, the Communist Party of the Philippines, their allies, and other interest groups have been exhorting the President to return to the negotiating table, asking him not to waste the gains achieved in three rounds of discussions.

Duterte had said that he would only resume the peace talks if there would be a “compelling reason” to do so.

Commenting on another issue, his war on drugs, he said never ordered law enforcers to murder people. What he told them was to protect themselves if the suspects threaten them.

“But if they resist with violence, you place in danger the life of a police, you have no right to do that,” he said.

Police officers, he pointed out, need not kill suspects because drug cases are non-bailable. /atm