‘They can’t silence us,’ Robredo says of ’Naga Leaks’ 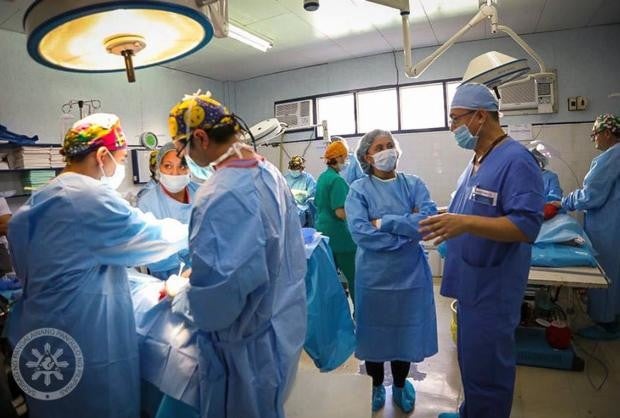 Vice President Leni Robredo (second from right, in face mask and surgical gown) talks with one of the doctors of Operation Smile at the operating room of the Visayas Community Medical Center on Friday, March 3, 2017. (Photo from the Office of the Vice President)

That’s the message Vice President Leni Robredo has to the administration of President Rodrigo Duterte in the wake of the so-called “Naga Leaks” directed against her by the “We Are Collective,” which has a website and a Facebook fan page.

Robredo told reporters on Friday that she would continue to voice out her her stand on issues even if these ran counter to the policies of the administration.

She said she believed “Naga Leaks,” supposedly an expose against her by the group “We Are Collective” was only meant to silence her.

(“The appearance of these supposed leaks is an attempt to silence us.”)

(“They have done this before. They didn’t succeed. And no matter what they do, they can’t silence us.”)

She said was prepared to face anything because she had nothing to hide.

(“I did not sin against the country. I will wholeheartedly and courageously express my beliefs no matter what they do to try block me.”)

Robredo was in Cebu for a two-day visit.

She arrived on Friday for the launching of “Until We Heal,” a global campaign of Operation Smile in celebration of its 35th anniversary.

The campaign aims to expand the scope of its mission of doing reconstructive surgery on indigent children and young adults who have cleft palate and cleft lip.

Robredo, who was tapped as its Smile ambassador, went to the Visayas Community Medical Center to observe the surgical mission.

On Saturday, Robredo will hold a dialog with fisherfolk in San Remegio town in Cebu and grace the relaunching of “Jesse Robredo: The Quest for Good Governance,” a book by her late husband Jesse Robredo, at the Ayala Center Cebu.

The vice president said she had not lost hope that the death penalty bill would be overturned by the Senate.

She stressed that the reimposition of the penalty was not an assurance that crime incidence would go down. She pointed out that there was empirical data to support this claim.

Robredo also pointed out that the country had an “imperfect” criminal justice system, raising the possibility that the innocent may be wrongly judged as guilty.

The bill would also be anti-poor because most of those in death row were indigents who could not afford to hire a good lawyer, she added. /atm