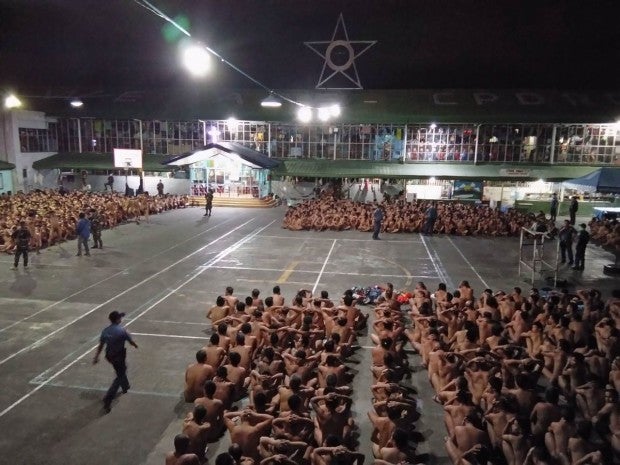 This handout from the Cebu Provincial Police Office (CPPO) taken on February 28, 2017 and released on March 2, 2017 shows naked inmates at the Cebu city jail sitting during a joint raid by the Philippine Drug Enforcement Agency and Cebu Police provincial office on illegal drugs and contrabands. Photos showing hundreds of prisoners in a Philippine jail sitting naked while being searched for contraband have triggered accusations of further rights abuses in President Rodrigo Duterte’s deadly war on drugs. The inmates of the Cebu provincial jail were woken before dawn on February 28, herded into the jail’s quadrangle and forced to strip while antidrug agents, police and military searched their cells, prison officer Rafael Espina told AFP. Merlie DACUNOS / CEBU PROVINCIAL POLICE OFFICE / AFP

CEBU CITY — The director of the Philippine Drug Enforcement Agency (PDEA) in Central Visayas (PDEA-7) on Thursday defended its decision to let inmates of the Cebu Provincial Detention and Rehabilitation Center (CPDRC) remove their clothes during a surprise inspection on Tuesday dawn.

PDEA-7 Director Yogi Filemon Ruiz said law enforcers had to protect themselves from inmates who may have wanted to attack them using bladed weapons hidden under their shirts or pants.

“That action was a mutual protection for both the agents and the inmates,” Ruiz told the Inquirer. “If they are not wearing anything, then we’re sure that not a single bladed weapon is hidden from us .”

In a statement, AI said it is the duty of authorities to “ensure that all persons deprived of liberty are protected from torture and other ill-treatment.”

The group cited the Anti-Torture Act (Republic Act 9745), which states the “cruel, inhuman and degrading treatment or punishment as a deliberate and aggravated treatment inflicted by a person in authority or agent of a person in authority against a person under his/her custody, which attains a level of security causing suffering, gross humiliation or debasement.”

Ruiz said one of the inmates did not remove his clothes.

On inspection, he said, a PDEA agent recovered a bladed weapon concealed in his clothes.

“What if my agent got stabbed? Do they (AI) want that to happen?” Ruiz said. “They keep on insisting that we violated the rights of the inmates. But don’t we (PDEA agents) have the right to protect ourselves as well?”

“Next time, if there will be another Greyhound operation at the CPDRC, let them (human right groups) do it. Let us see what they will do,” he added.

Detainees were asked to remove their clothes and stay at the open air quadrangle as the agents, with the help of police officers and members of the Armed Forces Central Command, searched the belongings and rooms of the inmates one by one.

Among the contraband seized by law enforcers were 76 cellular phones; 19 medium-size packs of shabu worth P30,000; a plastic containing marijuana leaves; assorted drug paraphernalia that include lighters, rolled tin foils, scissors, and a digital weighing scale; cash amounting to P92,000; bladed weapons; three DVD players; a tablet; laptop; passbook with a deposit of more than P300,000 and bank transaction receipts.

There was no need to secure a search warrant from the court since it was Cebu Gov. Hilario Davide III, CPDRC’s chief jailer, who gave permission for the surprise inspection.

Of the cellular phones seized, three were found at the detention cell where suspected Cebu drug lord Alvaro “Barok” Alvaro, one of the top drug personalities in Cebu, has been staying.

A pack of shabu was also recovered inside the same detention cell where at least 10 inmates were confined. PDEA-7 was conducting an investigation to find out who owned the prohibited substance.

Ruiz said at least five inmates from whom the packs of shabu were found were facing charges for violating Republic Act 9165 or the Comprehensive Dangerous Drugs Act of 2002.

The surprise inspection was conducted barely three weeks after two signal jammers were installed at the CPDRC to ensure that inmates can no longer communicate outside; and six months after the facility was raided by the police.

One passbook recovered from an inmate associated with Alvaro showed a deposit of P300,000 and withdrawal of P500,000—all in the same day. /atm