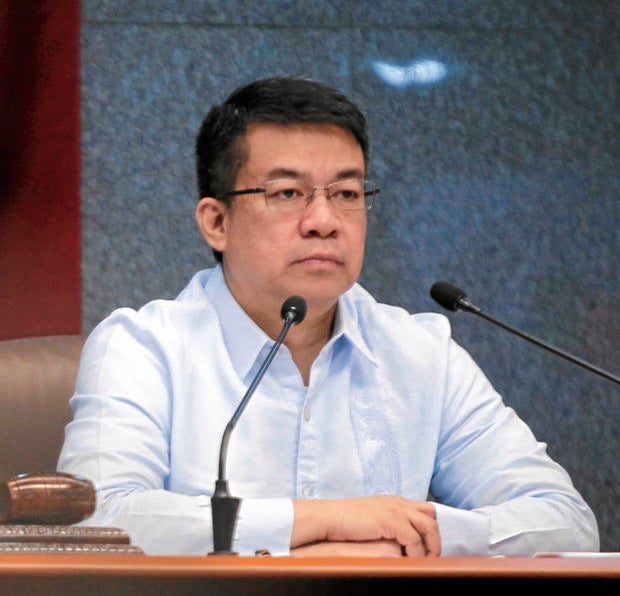 While expecting tough debates, Senate President Aquilino Pimentel III sees the chamber passing a bill restoring the death penalty, citing how its version in the House of Representatives was swiftly approved after proponents limited the punishable crimes to drug-related offenses.

Pimentel, who himself is “open” to the restoration of the death penalty,  admitted that the Senate still lacked a consensus on the proposal, a key component of President Duterte’s war on drugs.

Six death penalty bills are pending on the Senate committee on justice and human rights.

Following heated exchanges, the House of Representatives on Wednesday night passed the measure by voice vote on second reading. A third reading next week will just be a formality.

“I heard that the House limited it to one crime which they considered to be the most heinous as of the moment. So a one-crime death penalty law would have a bigger chance of passing the Senate than a death penalty law with a lot of enumerated crimes,” Pimentel told reporters on Wednesday night.

It would not be smooth sailing in the Senate, he said. “There is no consensus… [but] it has a chance. A close fight. I’m predicting anywhere from 14 versus 10 or 10 versus 14, either way.”

At the last hearing on Feb. 7,  Sen. Richard Gordon,  the committee chair, suspended proceedings after the Philippines’ commitment to international treaties that uphold the abolition of the death penalty was raised.

The Philippines is signatory to the Second Optional Protocol to the International Covenant on Civil and Political Rights, which binds acceding states to the movement toward the global abolition of the death penalty.

The House minority bloc decried the swift passage of the death penalty bill, saying the chamber was turned into a “rubber stamp” of President Duterte.

Opponents of the bill introduced amendment after amendment—but lost heavily to the supermajority, which voted “nay” to each one of them.

The House approved the “omnibus rejection” by the bill sponsor, Rep. Reynaldo Umali, of all amendments proposed by its opponents because they did not give any new arguments.

“I have not experienced this inordinate muscling of the members of the House. This is a chamber of puppets and bullies,” Rep. Edcel Lagman said.

Tyranny of the minority

“The House journal will speak for itself,” he said on Thursday. “We cannot allow the tyranny of the minority to prevail over the majority. We are a democratic country.”

The approved bill was a heavily diluted version of the original measure, seeking only to punish major drug offenses, including the manufacture and sale of illegal drugs and the maintenance of a drug den or laboratory, with reclusion perpetua, a 20-40-year jail sentence, to death.

The original proposal identified 21 heinous crimes, including plunder, treason, murder and rape, to be punishable by death, but the list was reduced to only drug-related offenses to make the bill more palatable to lawmakers.

House Majority Leader Rodolfo Fariñas said:  “The House of Representatives exists to represent our people. The people want the death penalty reimposed as expressed by their representatives in our caucuses and shown by them in our sessions, but a minor group against it had been bullying the majority in expressing its will.”

Fr. Jerome Secillano, a spokesperson of the Catholic Bishops’ Conference of the Philippines, slammed the approval of the bill as  “inhumane, shameful and blatantly disrespectful.”

“At the end of it, I don’t think conscience still played a part in deciding for the bill. It’s all about politics and political expediency on the part of our lawmakers,” he said on Thursday.

Batangas Archbishop Emeritus Ramon Arguelles  said: “The legislators choose to go against the word of God. They choose death in the name of the people.”

The death penalty, he said, would only be for the poor unable to pay lawyers to defend them, while those who plunder and use the people’s money for their evil deeds would “legally elude the death penalty.”

Manila Auxiliary Bishop Broderick Pabillo said the Church would not give up. “In life there is hope. Since we fight for life we do not lose hope. This is our resurrection faith.” —WITH REPORTS FROM NIKKO DIZON, DJ YAP AND JULIE M. AURELIO