Duterte renews attack on Church as he defends war on drugs 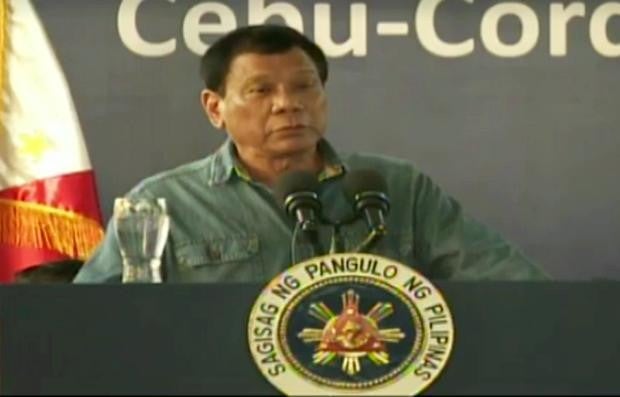 President Rodrigo Duterte delivers a speech on Thursday, March 2, 2017, at the groundbreaking ceremony of the Cebu-Cordova Link Expressway. (Photo from a video by RTVM)

CORDOVA, Cebu — President Rodrigo Duterte stepped up his attacks again on Thursday against the Catholic Church, whom he had been accusing of hypocrisy as he defended his administration’s war against illegal drugs.

In a speech laced with profanities, Duterte pointed out that priests were fond of wearing golden cross on their chests and using golden chalices while living in palaces.

In contrast, he added, Jesus Christ was nailed to a simple wooden cross and used wooden cups.

(“Priests do nothing else but rant. They live in palaces. You should sell those and use the money to buy rice for the poor. And stop collecting money. If you don’t, I will have you arrested for extortion.”

Duterte was here to grace the groundbreaking ceremony for the third bridge that would connect Cebu Island and Mactan Island.

The Cebu-Cordova Link Expressway (CCLEX) in Cordova town is a Public-Private Partnership between Cordova town and Cebu City and the private proponent Metro Pacific Tollways Development Corp. (MPTDC), which is owned by Manny Pangilinan.

Duterte was supposed to arrive at 3:00 p.m. at the boundary of Barangays Dapitan and Pilipog in Cordova to head in the lowering of the time capsule on the site where the bridge would be constructed.

His 30-minute speech was focused mostly on defending his war on drugs and his scathing attacks against the Catholic Church.

Catholic Church leaders have repeatedly condemned Duterte’s war on drugs, which has claimed at least 7,000 lives.

But Duterte maintained that he was committed to stop illegal drugs in the country.

(“Fathers, monsignors, bishops, this means to say: There will be more killings, because they will really fight back.”

“It won’t end tomorrow for as long as there is a drug pusher and drug lord,” he added.

He pointed out that while the Catholic priests would not want any more deaths in the ongoing war against drugs, the list of identified drug personalities could not just be disregarded.

He said he would order the precinct commanders in towns and cities all over the country to give the Catholic priests a list of all persons “playing drugs” and “destroying lives of innocents.”

“There’s a whale of a difference between killing an innocent person and killing a criminal. They ought not to be mixed up,” he stressed.

“I do not need martial law,” he went on. “I do not need to declare a suspension of the writ of habeas corpus. You destroy my country, you destroy the youth, I do not give a shit kung tanan pari magluhod, maghangad langit, mag ampo (if all the priest kneel down and pray and beg). I have a country to preserve and that is the Filipino nation. It has nothing to do with religion.”

The President also alludedthe contents of the report of the New York-based Human Rights Watch (HRW).

According to the 124-page report, more than 7,000 people have been killed – mostly by unidentified gunmen and some during police operations – since Duterte assumed office in July 2016.

But Duterte pointed out that the government had also lost its share of law enforcers. Among them, he said, were the 32 soldiers and 29 police officers who went after the drug laboratories, including in Mindanao.

He said it was his order to the police and military to hunt down drug personalities. If they would violently resist, then law enforcers should just kill these personalities instead of being killed themselves.

“I will kill you if you destroy the youth of my land. They are our assets,” Duterte said. /atm