Robredo tells peers in opposition:  Let’s be braver, louder in our dissent 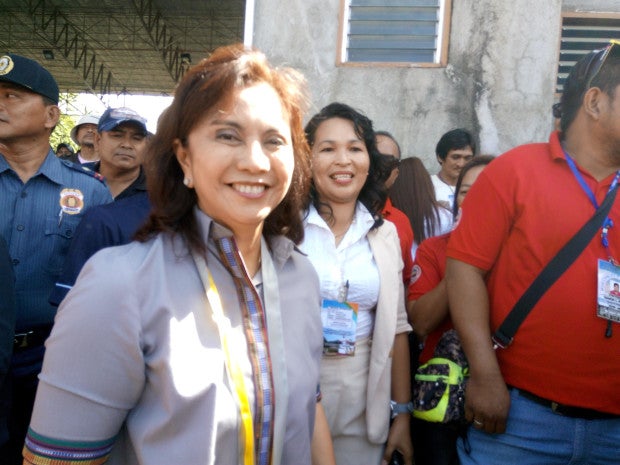 TAGBILARAN CITY — Vice President Leni Robredo told her colleagues in the political opposition to toughen up, be braver  and be louder in their opposition to the Duterte Administration’s policies even if they have lost some of the perks of power.

Robredo, who was in Bohol to distribute paddle boats to fishermen on Thursday, said the reorganization in the Senate had just sent the message that there would be repercussions to senators who would not kowtow to the policies of the Duterte administration.  The blunt message was toe the line or lose your committee chairmanship, she said.

Robredo led the distribution of paddle boats to fishermen from Maribojoc and Panglao towns.

“Nakakabahala sa reorganization ang mensaheng binigay — hindi puwedeng kumontra. Kapag kumontra ka parating may reparations yun (The message of the reorganization is troubling — you cannot go against [the administration.] If you do, there will be repercussions),” she added.

Sen. Leila de Lima, a vocal critic of President Duterte, was the first to suffer the repercussion, said Robredo.

De Lima has been detained in Camp Crame since Feb. 24 after the Muntinlupa Regional Trial Court ordered her arrest on drug charges.

The government accused her of receiving money from drug lords who were allegedly running an illegal drug trade inside the New Bilibid Prison in Muntinlupa. She dismissed the charges as politically motivated.

Sending De Lima to detention sent a “chilling effect” that those who would go against the administration would be penalized, said Robredo.

Sen. Franklin Drilon was removed as Senate President Pro-Tempore while Senators Francis Pangilinan, Bam Aquino and Risa Hontiveros lost their chairmanships in the committees of agriculture, education and health respectively.

Despite the reorganization, Robredo said the four senators would continue to speak and stand for what is right.

Maribojoc town is the bailiwick of President Duterte’s ally, Secretary Leoncio Evasco Jr. who was the town’s mayor.

Maribojoc Mayor Gomersindo Arocha said there was no politics in Robredo’s visit.

“We are just so happy with what she has done to our town,” said Arocha.  SFM