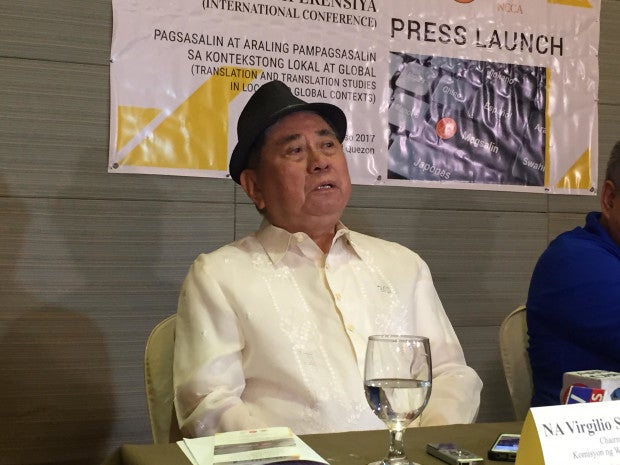 National Commission for Culture and the Arts (NCCA) chairperson Virgilio Almario on Wednesday said he would push for the creation of a Department of Culture in a bid to harmonize all the country’s cultural agencies.

A National Artist for Literature, Almario led the press launch of an international conference spearheaded by the Komisyon ng Wikang Filipino (KWF) and NCCA titled “2017 Salinan Pandaigdigang Kumperensiya: Pagsasalin at araling pagsasalin sa kontekstong lokal at global,” to be held at the Ateneo De Manila University from Sept. 28 to 30.

In an interview with reporters, Almario,  known for his pen name Rio Alma and his role in heading the KWF, said it’s about time the new administration creates another department to organize the country’s cultural activities.

He said all the cultural agencies such as the KWF, National Museum, National Library, among others would be put under the supervision of this department which would harmonize the different functions of these bodies to avoid repetition of duties.

“First of all, we need a body which can organize and supervise cultural activities throughout the country,” Almario said.

“We need a body to harmonize all the cultural agencies,” he added.

He added that a creation of a department to supervise all cultural bodies would also rule out the need of an arbitration in cases of dispute between two directors of the agencies.

In relation to the advocacy of promoting translation as a practice and as a field of study, Almario said a Bureau of Translation would be placed in the department to institutionalize the need to translate the country’s literary works from 131 different languages to Filipino, and vice versa.

He touted the role of translation into the Filipino language to promote nation-building.

(Our purpose this morning is not only to report about the international conference, but also for the media to be part of our campaign to enlighten our citizens and our leaders about the need for translation to unity all Filipinos.)

Almario said there are bills to create a Department of Culture already pending in the Senate.

He said his role in the NCCA would be to protect not only the heritage buildings but also the “non-tangible heritage” of the country such as language and literature. JE