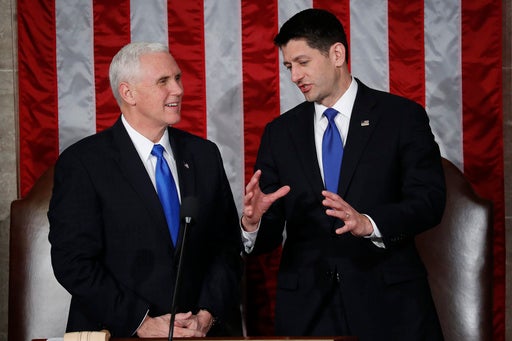 WASHINGTON—Donald Trump delivers his highly-anticipated maiden speech to Congress Tuesday (Wednesday, Manila time) seeking to reframe his young presidency amid growing calls from lawmakers for clarity about his policy proposals, from healthcare and economic plans to increased defense spending.

That hawkish message will continue in a primetime address to lawmakers and the nation at 9:00 pm (0200 GMT Wednesday), an opportunity for Trump to frame the big bold choices of his administration.

But aides say the 70-year-old Republican will also focus on a “renewal of the American spirit,” as he tries to tilt back toward the bread-and-butter issues that helped him get elected.

“All I can do is speak from the heart and say what I want to do,” Trump said in a pre-speech interview with Fox News.

Trump’s focus will be “solving real problems for real people,” said a senior administration official, previewing an address to be centered on “economic opportunity.”

One question ahead of Trump’s longest speech to date as president: Will he remain on message, or stray from the choreographed ritual and ad-lib long stretches of his address, as he often did on the campaign trail?

In what would be a dramatic shift in policy, Trump told television anchors Tuesday at the White House that he could support reform that would legalize millions of undocumented immigrants — although it was not clear if he would address the issue on Tuesday night.

“The time is right for an immigration bill as long as there is compromise on both sides,” Trump told the anchors, according to people present during the discussion who asked not to be identified.

Trump’s anti-immigrant rhetoric was harsh and uncompromising during the campaign, as he signaled a willingness to deport millions. Changing that approach could antagonize his own base.

The billionaire’s staunch populist message on the economy was equally crucial in his November victory over Democrat Hillary Clinton — helping him sway voters in crucial Rust Belt states Michigan, Ohio and Pennsylvania.

Now his challenge is translating that into tangible policy steps and legislative achievements to match his campaign promises.

Some 44 percent of Americans think Trump is doing a good job, according to the RealClearPolitics poll average, a historic low for modern presidents after a month in office.

Trump is likely to use the pomp and tradition-filled occasion to reconnect with blue collar voters, including touting his willingness to tear up trade deals that he says are bad for American workers.

Many will be looking beyond the rhetoric to Trump’s plans for rebuilding America’s creaking infrastructure and for high-stakes tax and healthcare reform.

On all three issues, Trump faces a difficult balancing act with fellow Republicans, who control both the Senate and House of Representatives.

To succeed, Trump — the consummate political outsider — may have to embrace Washington deal-making.

Repealing and replacing Obamacare has been a Republican rallying cry for years, but there is still no clear plan in place to proceed.

In a blunt admission Tuesday, the Senate’s top Republican acknowledged that the White House and Congress remained at odds over healthcare.

“We’re not there yet,” Mitch McConnell told reporters.

Conservatives are desperate to pull Obamacare out by its roots, but party pragmatists are wary of dismantling a system that has, despite driving up costs for many, helped some 20 million Americans obtain health insurance.

Tensions between the executive branch and the Republican-led Congress are also simmering over Trump’s 2018 budget proposal.

The White House said Monday Trump wants to hike defense spending by $54 billion, offsetting with cuts in foreign assistance and other non-military spending.

Some Republicans including McConnell have already bristled at reports that Trump wants to slash State Department funding by a third.

Trump may also struggle to balance his defense surge with a pledge to keep costly Social Security spending — without worsening the country’s national debt, soon set to top $20 trillion.

He has speculated that robust economic growth may square the circle — providing a tax receipt windfall.

Republicans will offer the president a warm reception, but Democrats stung by Clinton’s loss and opposed to Trump from the start, will likely be more muted.

Congressman Peter Welch said he hoped Trump could “bring the country together.” But he expressed worry Trump was not shifting to the immense challenges of the presidency.

“I haven’t seen evidence that Trump has gotten out of campaign mode,” Welch said.

Read Next
2 seriously hurt in Isabela shooting
EDITORS' PICK
4 essentials for overcoming data protection challenges in the New Normal
294 areas in NCR under granular lockdown — PNP
Gordon to Pharmally’s Mago: Show up or be a fugitive
Pharmally’s Mago no longer in her condo unit — Gordon
Smart reaffirms 5G leadership as PH’s most reliable 5G mobile operator
Huawei’s relentless mission to bring ultimate health and wellness tracking for your fitness goals
MOST READ
Senators secure Pharmally exec offering to turn witness
Carlo Aquino reveals he almost starred in hit Korean series ‘Squid Game’
‘If it goes to Malacañang, so be it’: Lacson vows to follow evidence in Pharmally probe
Typhoon Lannie likely to intensify on Monday
Don't miss out on the latest news and information.