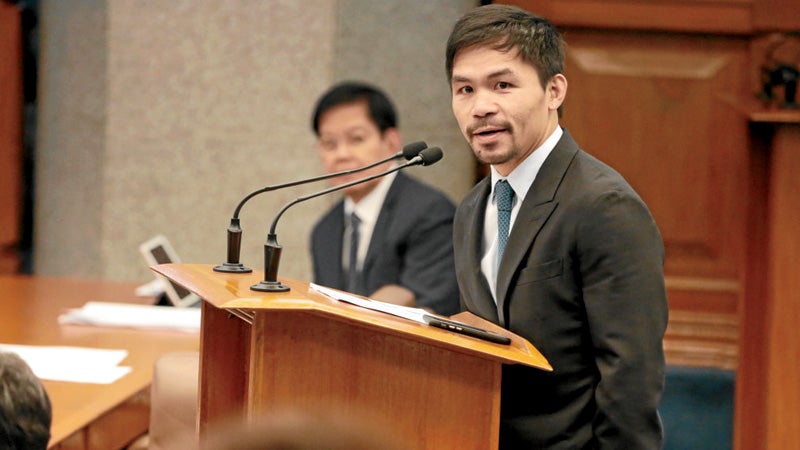 The decision to let Sen. Manny Pacquiao deliver the knockout punch was made over dinner at his luxurious Forbes Park mansion in Makati City on Sunday.

There, 15 senators agreed to expel the four Liberal Party (LP) senators from the majority bloc and end persistent wrangling in the Senate.

By Monday a resolution had been signed by 16 senators expressing the sense of the majority that Senate President Pro Tempore Franklin Drilon, as well as Senators Francis Pangilinan, Bam Aquino and Risa Hontiveros, were not supportive of President Duterte’s legislative agenda.

Senate Minority Leader Ralph Recto and minority member Sen. Francis Escudero were not invited to the event, but were later told about the plan to oust the recalcitrant four.

Senate President Aquilino Pimentel III showed the resolution to Drilon as a matter of courtesy, according to Senate Majority Leader Vicente
Sotto III.

In the afternoon, Pacquiao took the floor and began the expulsion process.

The “people’s champ” first declared Drilon’s position vacant; he was replaced by Recto.

Sen. Panfilo Lacson told reporters that he, Sotto, Senators Gregorio Honasan II and Loren Legarda pushed for the meeting on Sunday, concerned about the “awkward” situation in the chamber.

Lacson said that in many instances, the LP bloc voted at the behest of Sen. Antonio Trillanes IV, Mr. Duterte’s gadfly.

For example, Lacson said, the LP members had voted against the majority to have the P50-million bribery scandal in the Bureau of Immigration be investigated by the Senate blue ribbon committee. Instead, they voted to refer it to Trillanes’ committee.

The blue ribbon committee chaired by Sen. Richard Gordon eventually took over the inquiry, which will have a fourth hearing next week.

Lacson said that whenever there were issues tackled on the floor, Trillanes “would always go to (the LP bloc) and consult, instead of consulting the members of the minority.”

“So this was not a one-shot deal, or decided overnight. This was based on observations of the other members, including myself,” he said.

Lacson said some senators had reservations about the surgical move. “We already decided on this, we voted on this, it was unanimous. What’s the reason for postponing the action? Chances are it might leak and something else might happen,” he said.

Voicing out some of the senators’ sentiment, Sotto said they did not want the chamber to be a “Senate Bureau of Investigation,” referring to a series of Senate inquiries launched since last year.

Sotto was asked whether the recent Senate vote to recall confessed hit man Arturo Lascañas and allow him to recant a previous testimony and implicate Mr. Duterte in the Davao Death Squad assassinations when he was mayor was the last straw.

He said it was just a “sidelight” but it was really the wrangling between the majority and the LP bloc on several other issues.

“It’s like every week there was always an issue,” Villar said. What she said she did not like was that the majority bloc then had to vote to get a consensus on an issue.

“We’re supposed to be together,” Villar told reporters. “At least now, we know that the (LP senators) are now the minority.”