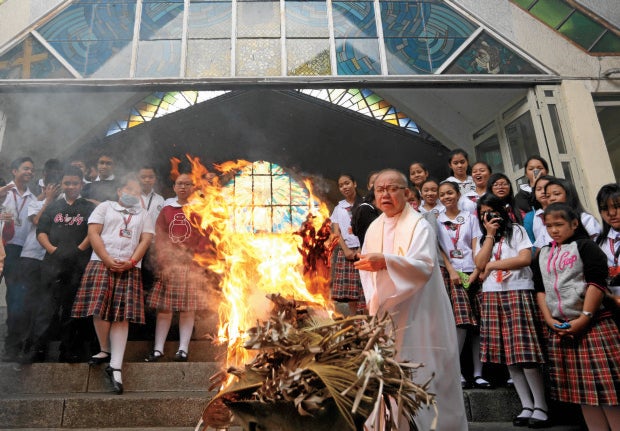 To the faithful: Start Lent today, Ash Wednesday, by fasting. You can donate the money you save by skipping meals to the feeding program of the Catholic Church.

Manila Archbishop Luis Antonio Cardinal Tagle on Tuesday appealed to the faithful in his archdiocese to contribute the money they save to the Fast2Feed program.

“Once again, we humbly ask you to help us in this undertaking. We appeal to you to support the Fast2Feed of Pondo ng Pinoy’s Hapag-Asa program,” Tagle said in a pastoral letter.

The pastoral letter is to be read on Ash Wednesday in parishes under the Archdiocese of Manila.

Tagle said it would take only P1,200 for six months, or P10 a day, to nourish back to health a hungry and undernourished child.

“In this season of Lent, we are especially called to imitate the generosity of God, particularly toward the poor and disadvantaged,” Tagle said.

Lent, a season of fasting, reflection and prayer, begins on Ash Wednesday.

The season leads to the commemoration of the resurrection of Jesus Christ on Easter.

Ash Wednesday is observed by fasting and abstinence, as well as wearing ash on the forehead as a reminder of human sinfulness, mortality, mourning and repentance.

The ash is made from burning the palms blessed on Palm Sunday of the previous year.

Fast2Feed is a project that regularly starts on Ash Wednesday.

The project aims to combat hunger and malnutrition among Filipino children by encouraging people to fast during Lent and to donate the money they save by skipping meals to the program.

This flagship project of the Pondo ng Pinoy’s Hapag-Asa program aims to feed at least 20,000 children for the whole year.

Since its inception in 2005, the program has fed 1.6 million children.

Tagle said Fast2Feed 2017 envelopes would be distributed in parishes and schools. The faithful may offer the envelopes containing their donations during Mass or turn them over to their local parish office.

Fr. Anton Pascual, president of Radio Veritas, urged the faithful to fast and abstain from meat, not only during Ash Wednesday and Good Friday, but on all Fridays of Lent.

“This practice of penitential abstinence from meat during this time is part of self-denial and mortification in prayerful remembrance of the passion of Jesus Christ,” Pascual said.

Lent is an opportunity for the faithful to do works of charity, he added.

A way of life

Fr. Jerome Secillano, executive secretary of the Permanent Committee on Public Affairs of the Catholic Bishops’ Conference of the Philippines, stressed that fasting and abstinence “are not mere fads that just go away over time.”

“They’re a way of life that teach us to empty ourselves so that we can have a place for Jesus,” he said.

It’s not only a physical kind of fasting, but “a kind of spiritual emptying that entails giving up so many things, including perhaps the excessive and irresponsible use of social media,” he said.

“But if social media will be used to create a kind of spiritual awareness, it will be most welcome because the essence of this spiritual sacrifice is to focus on Jesus, his suffering, death and the redemption of humanity,” he said.