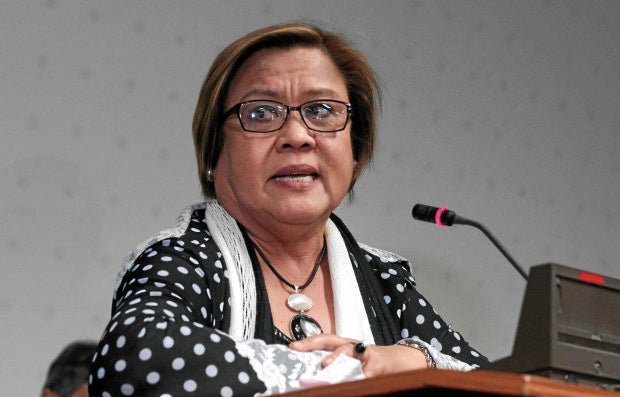 The Supreme Court on Tuesday scheduled oral arguments on March 14 for the certiorari petition that Sen. Leila de Lima filed questioning the order of a Muntinlupa City judge to arrest and detain her over drug charges filed by the Department of Justice (DOJ).

The high court did not immediately act on De Lima’s pleas for a temporary restraining order stopping the proceedings at the Muntinlupa regional trial court and a status quo ante order on the arrest warrant issued by Judge Juanita Guerrero.

The oral arguments will be held at the En Banc Session Hall on March 14 at 2 p.m., Te said.

Senior Associate Justice Antonio Carpio presided over the court’s session on Tuesday as Chief Justice Sereno was on an official trip to London.

On Feb. 17, the DOJ filed before the Regional Trial Court (RTC) three cases of violations of Republic Act No. 9165 or the Comprehensive Dangerous Drugs Act of 2002 against De Lima, who was accused of receiving payoffs from convicted drug lords incarcerated in the New Bilibid Prison.

Presiding Judge Guerrero of Branch 204 issued the arrest warrant on Feb. 23; the PNP arrested De Lima at the Senate the following day. The senator is currently detained at the PNP Custodial Center in Camp Crame, Quezon City.

In her petition filed last Monday before the Supreme Court, De Lima, through her lawyers, raised the issue on whether the cases against her should be tried by the RTC or the Sandiganbayan antigraft court.