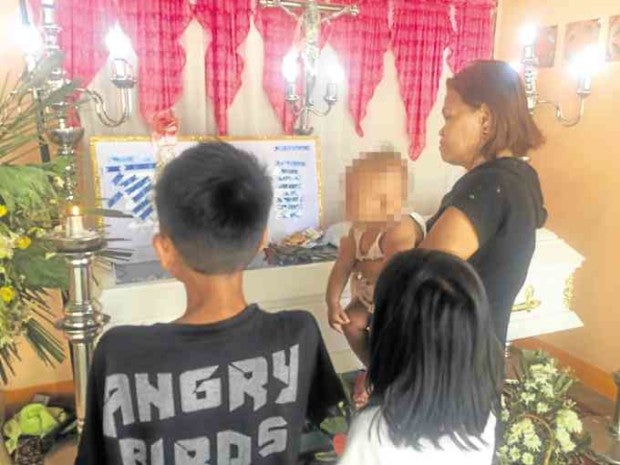 A relative and three of Michelle Mergillano’s children view her remains on Tuesday. —Jodee A. agoncillo

“Stay back, kids. Don’t get mixed up in this or we’ll get blamed for it, too.”

This was how four armed men warned the children of Michelle Mergillano after kicking the door open and finding her cradling a baby, her youngest, in her arms.

According to one of the children, one of the intruders just dropped the baby on the floor and shot the mother of five inside their residence in Barangay Malanday, Marikina City, on the night of Feb. 20.

Speaking to the Inquirer at the wake on Tuesday, Mergillano’s eight-year-old daughter “Bea” said she begged the hooded intruders to spare Michelle’s life, but to no avail. “I have many siblings! Nobody will look after us!” the girl recalled telling them.

Mergillano was shot four times—all in the head. Her children, who cleaned the crime scene, recovered two of her teeth on the floor.

One of the victim’s relatives, who asked not to be named for security reasons, said the gunmen were also probably after Mergillano’s husband Bernard, who was on the roof of the house when the attack took place.

The couple, the relative said, were drug users but they did not surrender to the police under the “Oplan Tokhang” antidrug campaign. A report by the barangay’s anti-drug abuse council also alleged that Bernardo ran a drug den.

Mergillano’s eldest child, 13-year-old “James,” blamed his father for his mother’s vice, which he said started two years ago. “I’m angry at Papa,” the boy said.

James said he had dreamed of his mother after the killing and “she was handing me a letter.”

With the wake being held in a church-owned property not far from the family residence on Hyacinth Street, Bernard, who earned a living selling the corn snack called “binatog,” had since made himself scarce and would only show up briefly to place flowers on his wife’s coffin.

After their mother’s burial this Thursday, the five Mergillano children will be left to the care of different relatives.

According to the Marikina police, three more alleged drug users were killed by unidentified gunmen in the city that night: Michael Vitalico, Emilio Lamsen III and Bernie Subungan.

Like Mergillano, these other victims were residents of Barangay Malanday and were on the local drug watch list.