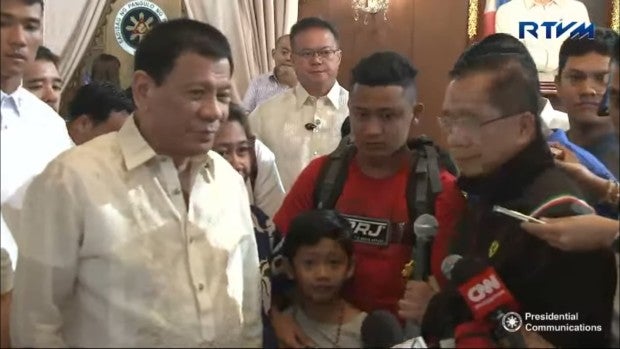 In Malacañang, Duterte presented Rexon Romoc, who was released today after being kidnapped in August last year with his parents in Payao. Romoc was held captive for seven months.

His mother Nora and father Elmer were released in August 22 and November 13, 2016, respectively after paying ransom.

Presidential peace adviser Jesus Dureza said the child was released through “well-meaning officials in Sulu and elements of the Moro National Liberation Front.”

“They sold everything including their small sari sari store and borrowed from friends and relatives to raise that amount. The father was released but the captors still retained son Rexon,” Dureza said.

“Nora had been agonizing over Rexon, her youngest of 2 children. Since last December, I would get texts and calls from her, most of the time crying, asking for help,” he added. JE/rga