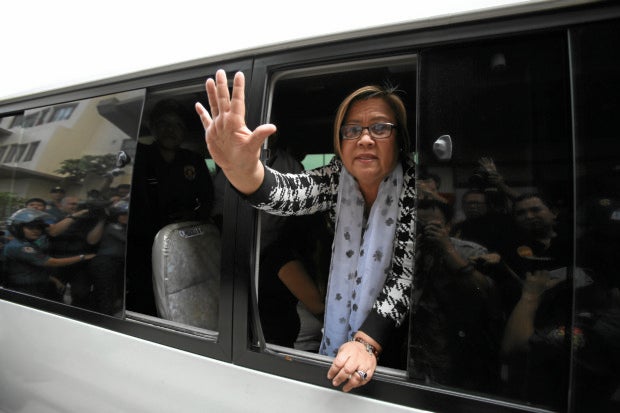 If she’s into the illegal drug trade, what kind of narcotics did she peddle? How much did she actually sell? How did she make the transactions?

These were among the questions raised by Sen. Leila de Lima’s lawyers as they asked the Supreme Court on Monday to release De Lima, President Duterte’s most vocal critic, who has been detained in Camp Crame in Quezon City since Friday on what they claimed were trumped-up drug charges.

In an 82-page petition for certiorari, the senator urged the high tribunal to issue a status quo ante order and a temporary restraining order barring Executive Judge Juanita Guerrero of the Muntinlupa City Regional Trial Court (RTC) Branch 204 from hearing her case.

She also moved for Guerrero’s inhibition for allegedly prejudging the case and for committing grave abuse of discretion in issuing the arrest warrant with “undue haste and inordinate interest.”

“If they can do this to a senator, how much more to (ordinary) citizens like us?” Alex Padilla, one of De Lima’s lawyers, told a news briefing before the petition was filed.

“The issuance of a warrant of arrest by a court that has no jurisdiction over the case makes such warrant obviously and patently null and without basis, thus making Senator De Lima’s detention … illegal,” Padilla said.

De Lima sought the high court’s intervention three days after Guerrero ordered her arrest for her alleged involvement in the narcotics trade in New Bilibid Prison (NBP) when she was justice secretary.

The defense petition essentially avers that the RTC has no jurisdiction over De Lima, a public official; that the accusations against her should be investigated by the Office of the Ombudsman; and that the case is tried, if evidence merits it, in the Sandiganbayan, the antigraft court, not in a criminal court.

The Department of Justice (DOJ), in its 52-page resolution indicting De Lima, claims that the senator is being charged with the proliferation of drugs in NBP.

Payoffs—ranging from P50,000 to P5 million—were allegedly coursed through De Lima’s driver and lover Ronnie Dayan and Bureau of Corrections officer in charge Rafael Ragos, her coaccused in the case for selling and trading in illegal drugs.

Also mentioned in the resolution is the testimony of Director Benjamin Magalong of the Criminal Investigation and Detection Group.

The highly respected Magalong had called for a multiagency operation in NBP to stop the proliferation of drugs and the lavish lifestyle of convicts, only to see De Lima lead the raid, to the exclusion of other agencies, in December 2014 and transfer 19 top convicts to the National Bureau of Investigation detention center, except for inmate Jaybee Sebastian, who allegedly went on to consolidate his hold on the narcotics business.

The DOJ says criminal courts have primary jurisdiction over drug cases. In cases where there is concurrent jurisdiction with other tribunals, it points out that the Supreme Court in Liwag v. DOJ decided in February 2005 that the “agency that first takes cognizance of the complaint shall exercise jurisdiction to the exclusion of others.”

For example, the DOJ says that a Pasay RTC had previously taken cognizance of the election sabotage case against former President Gloria Macapagal-Arroyo, now a Pampanga representative, and acted swiftly within hours on voluminous documents submitted by the DOJ under De Lima to declare that there was probable cause to prosecute Arroyo.

Then suffering a severe neck problem, Arroyo was placed under hospital arrest for nearly five years, until the Supreme Court decided there was lack of evidence against her and ordered her release.

The De Lima camp, in going to the Supreme Court, insists that the complaint against the senator “was defective and invalid.”

“If you scrutinize it, you will also see that there was no evidence against (De Lima),” said Phillip Sawali, De Lima’s chief of staff.

According to Sawali, the DOJ panel has no authority to conduct preliminary investigation of the cases since these are under the “exclusive and original jurisdiction” of the antigraft court Sandiganbayan.

Aside from its failure to summon the NBP inmates who had testified against De Lima in the House inquiry, the DOJ did not mention what kind of illegal drugs the senator allegedly sold in violation of the expressed provision of Republic Act No. 9165, or the Comprehensive Dangerous Drugs Act of 2002, Sawali said.

In its petition, De Lima’s defense team argued that the legal remedy she was seeking was “not just for the vindication of her rights as an individual and as an accused, but also to prevent an even more far-reaching offense against our nation from being committed.”

“By showing that even a senator … cannot save herself from the vindictiveness of a tyrant, that she cannot hope to voice her dissent … we are allowing a culture of impunity, corruption and depravity to once again descend upon our nation,” De Lima’s defense team said.