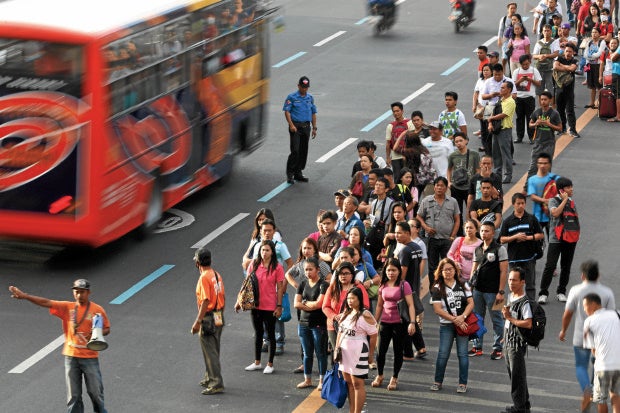 STRANDED Commuters along Commonwealth Avenue in Quezon City share frustration about getting a ride as a transport strike grips many key cities and towns in the country. —NIÑO JESUS ORBETA

Transport groups that led the nationwide jeepney strike on Monday claimed to have paralyzed 85 percent of the country’s public transport sector, but the Land Transportation Franchising and Regulatory Board (LTFRB) said the strike had little impact on the commuting public in Metro Manila.

It was the second transport strike that several groups staged this month to press the government to scrap the plan to phase out old gas-powered jeepneys in favor of electric ones.

In Cebu City, office clerk Ryan Abella had been standing on the road in Barangay Talamban for more than an hour on Monday morning to get a ride to Barangay Subangdaku in Mandaue City where he worked.

Abella said he would just explain to his superiors why he reported late for work.

Like him, Karla Ramos, 24, had been waiting for more than an hour in Nasipit, Talamban, but could not find a ride to get to her work at the Pacific Mall in Mandaue.

“I might take a half day if I won’t get a ride this morning,” said Ramos, a human resources coordinator.

Abella and Ramos were among the thousands of passengers in the Visayas who were stranded because of the transport strike.

The mass action also affected public transport in Iloilo, Aklan, Capiz, Cebu and Negros Occidental provinces, and urban centers in Laguna province and three provinces in Bicol, according to protesters.

Piston national president George San Mateo said another indicator of the success of their move was the government’s decision to suspend classes on Monday.

San Mateo apologized to commuters affected by the strike but said that what Piston and other groups were doing was for the sake of the public because jeepney fares would go up if the government plan pushed through.

Ramon Rescovilla, deputy secretary general of the Concerned Drivers and Operators (Condor-Piston) in Bicol, said the plan to phase out old jeepneys would affect a driver’s only means of livelihood.

“What will happen to our family if this order will be implemented?” he asked. “We will not give in and allow the phasing out of public utility jeepney (PUJ). This is our life and our work is noble.”

Department of Transportation (DOTr) Order No. 17 requires operators to replace 15-year public utility vehicles with an electric version that would cost between P800,000 and P1.3 million each, according to Piston.

Aside from the expensive vehicles, jeepney owners are required to have P7 million in minimum capital and at least 10 units of electric jeepneys per franchise.

Ringgo Lago, Piston coordinator for Northern Mindanao, said 99 percent of the public utility jeepneys would be phased out once these policies were implemented.

An LTFRB board member, Aileen Lizada, said that there was no plan to phase out jeepneys, noting that the draft order in the possession of the protesters is bogus.

She noted that what the government was working on was the modernization of jeepneys to be rolled out in a three-year period.

The LTFRB official said the board had just concluded a third multiagency technical working group meeting, aimed at crafting an affordable package for jeepney operators.

“How many more deaths, injuries do you want to see on the road for you to be convinced that the only way for us to go is to modernize,” Lizada said.

As early as 6 a.m. on Monday, the strike called by Piston, No to Jeepney Phaseout Coalition, and Samahan ng Tsuper at Operator ng Pilipinas Genuine Organization (Stop & Go) Transport Coalition had supposedly affected such areas as Alabang, Marikina and Manila.

Lizada, however, said that the strike had little effect, as nearly half of the 160 vehicles the LTFRB deployed were used to ferry stranded passengers.

As of 12:30 p.m. yesterday, Lizada said the LTFRB assisted 5,840 passengers, equivalent to 292 jeepney trips. By comparison, Metro Manila has more than 85,000 registered jeepneys.

The Philippine Coast Guard said it provided 12 M35 cargo trucks to stranded passengers in Manila, while the Department of Public Works and Highways directed its district offices in the metropolis to send out dump trucks to ferry affected commuters.

In Laguna, reports from the police and provincial government showed that commuters from the province’s first district—the cities of San Pedro, Biñan and Sta. Rosa—were most affected by the strike.

Officials of these cities, as well as the cities of Cabuyao and San Pablo, suspended classes in all levels after several jeepney and tricycle drivers refused to ply their regular routes.

Commuter Lucille Gregorio said protesters had forced passengers off tricycles and had threatened to overturn the tricycles should they refuse to alight.

Rommel Palacol of the government-run Laguna Action Center said there were also reports of protesters puncturing tires of jeepneys that did not join the strike.

In the Bicol region, Rescovilla of Condor-Piston said drivers of jeepneys and passenger vans plying routes in Albay, Camarines Sur and Camarines Norte joined the strike, stranding commuters, most of them students and employees.

Rescovilla said about 80 percent of Condor-Piston Bicol’s 12,000 members joined the strike in the three provinces.

Tricycles in the cities of Legazpi, Ligao and Tabaco in Albay picked up passengers but many had complained about the steep fare.

School officials in Albay suspended classes in all levels.

Despite the transport strike, private and government offices across the region were open, including banks, shopping malls and other commercial establishments.

Albay Gov. Al Francis Bichara deployed government trucks to ferry stranded passengers in the towns of Tiwi and Polangui and those along the Daraga-Legazpi City route.

About 500 jeepney operators and drivers, backed by 500 supporters and militant groups, rolled out protest caravans through the main cities and towns of Isabela and Cagayan provinces on Monday.

In spite of the protest, public utility services continued unhampered in most areas.

Another caravan of 100 vehicles and 200 people was held in Tuguegarao City.

“Only big companies can afford vehicle replacement while small operators will be left out in the cold and become poorer,” Mariano said.

In Baguio City, jeepney operators and drivers held a protest rally at the Igorot Park near Burnham Park in the downtown area.

The strike was generally peaceful in Iloilo province except for reported attempt to intimidate bus drivers in Janiuay town.