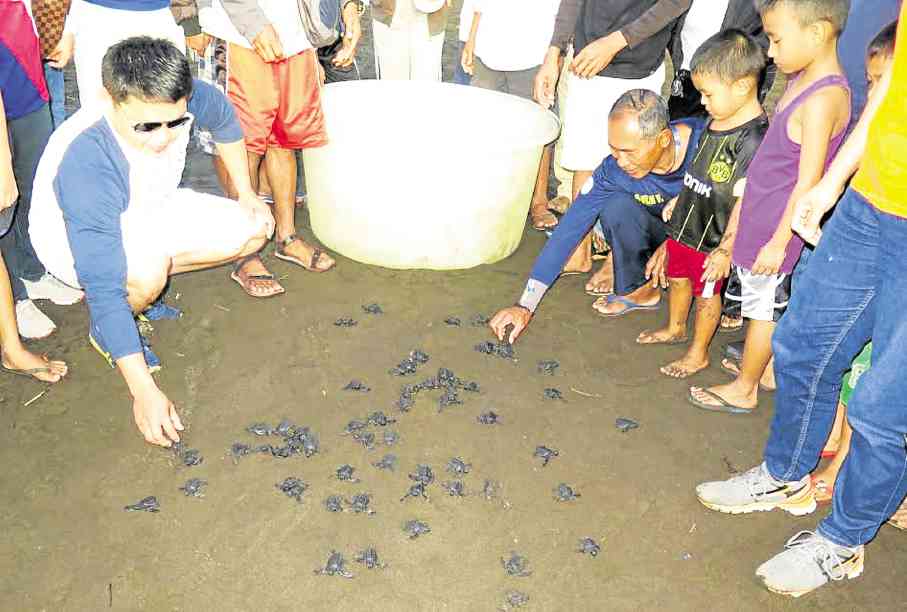 SARIAYA, QUEZON — Every January, just before sunrise, hundreds of “pawikan” (sea turtle) hatchlings race on the shores of Sariaya town in Quezon province toward the Tayabas Bay.

The annual spectacle “is a manifestation of our commitment to the protection and rehabilitation of the bay,” said Edwin Frias, 46, a fisherman and Bantay Dagat (fish warden) from the village of Bignay II.

Frias and other villagers, local officials and environmentalists released 104 green sea turtles last month. Another batch of 115 were also released in the villages of San Roque and Guisguis.

Sariaya, which hosts beach resorts along the stretch of the province’s ecotourism highway, has become a haven of green sea turtles and a model of public-private partnership for environmental protection.

The turtles (Chelonia mydas) are classified as endangered by the International Union for Conservation of Nature and the Convention on International Trade in Endangered Species of Wild Fauna and Flora.

For decades, illegal and commercial fishing, and pollution had damaged the bay, which has an area of 287,332 hectares, according to a study of Tanggol Kalikasan (TK), a public interest law office which advocates environmental protection.

Moreover, reef conditions had deteriorated due to dynamite and cyanide fishing, while mangrove forests along the coastline had been degraded or destroyed, it said.

In 2000, TK started a rehabilitation project aimed at reducing threats and improving sustainable management of biodiversity in the Tayabas and Pagbilao bays.

Funds came from the US Agency for International Development through the Philippine-American Fund Project.

A public-private partnership for the conservation of the Tayabas Bay was also initiated by lawyer Asis Perez, then with the legal defense center of Haribon Foundation in Southern Tagalog; Proceso Alcala, then a Lucena-based businessman; and other civic organizations.

Alcala would later become a congressman and agriculture secretary, and appoint Perez to head the Bureau of Fisheries and Aquatic Resources.

The job was not easy at first. Juliet Borlon-Aparicio, TK-Southern Luzon director, said the group needed to guide local officials and Bantay Dagat members in the implementation of Republic Act No. 8550, or the Philippine Fisheries Code of 1998, to stop illegal and unregulated fishing.

Fishermen and local governments were fiercely protective of their fishing grounds, said Buelo, now the Quezon provincial government’s public information officer. “They were receptive. We explained our projects and programs to protect the bay and they understood.”

Frias said the residents became aware of the need to protect the environment after undergoing seminars, lectures and exposure trips given by government agencies and environmental groups such as TK.

Sariaya Mayor Marcelo Gayeta said the municipality and owners of resorts and other tourist-oriented businesses had already joined hands to protect and rehabilitate the bay.

A persistent problem, however, was the intrusion of commercial fishing vessels despite the ban imposed by local ordinances, Buelo said.

The latest release of baby turtles in Bignay II demonstrated anew the community’s resolve to keep the bay healthy.

Fishermen would release turtles and other marine animals which accidentally get entangled in their fishing nets, Rosalie Salvan of the Community Environment and Natural Resources Office in Pagbilao said.

Fishermen and fish wardens in Bignay II and in the nearby Monte Vista beach resort look after the nesting site.

Perez said fish sanctuaries should be established and mangroves should be rehabilitated to further protect the bay.

These efforts should be supported by heightened public awareness and strict law enforcement to check illegal fishing, he added.