Lascañas tells why he lied in Senate 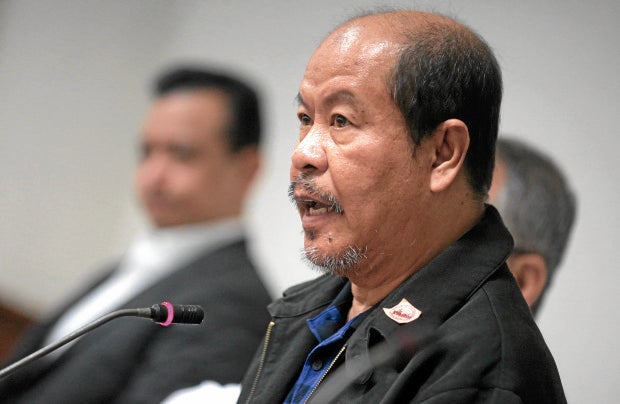 Retired SPO3 Arturo Lascañas appeared before the media in the Senate on Feb. 20, 2017, and claimed that the Davao Death Squad was real. INQUIRER FILE PHOTO / GRIG C. MONTEGRANDE

It was fear for his safety and loved ones that prompted him to lie when he testified last year in the Senate probe on alleged extrajudicial killings in the country,  former SPO3 Arturo Lascañas said in a 12-page affidavit.

Lascañas denied the existence of the so-called Davao Death Squad (DDS) when he first testified before the Senate committee on justice and human rights. But he resurfaced at a press conference in the Senate on February 20 and recanted his testimony.

“When I appear before the Senate, I denied the accusations made by Edgar Matobato about the extrajudicial killings in Davao City and the Davao Death Squad,”   he said in his affidavit executed last February 19.

“I was forced to deny what Matobato said even if most  of it was true, because  I was afraid for the safety and security of my loved ones in Davao City. The  truth is that most of what Matobato told the Senate is true. It’s just that Matobato was only a foot soldier and had limited knowledge of what really happened because the operations were compartmentalized,”  said the former policeman, who claimed to be a “major player” in the group.

Matobato earlier testified before the Senate and claimed that he was a DDS member and accused Duterte of ordering the killings of  criminals in Davao City when he was still its city mayor.  He also said that the then mayor was behind the bombing  of mosques in the province.

Lascañas said the DDS’ code name  for  then Duterte was  “Superman.”

“I regret what I did and I know have to answer for all my misdeeds before the people, the law, and before God,”  he added.

In the beginning, Lascañas said, the DDS targeted drug addicts, drug pushers, snatchers, armed robbers, and other criminals.   Later, however, Duterte ordered them “to go after and kill his personal and political enemies,” Lascañas said.

“We became like hired or contract killers, who killed not only criminals but innocent people,” he said.

Lascañas then narrated how the group, on  Duterte’s orders, bombed several Muslim mosques in Davao City in 1993, and killed certain people like the  “Patasaja”  family, and Davao radio broadcaster Jun Pala.