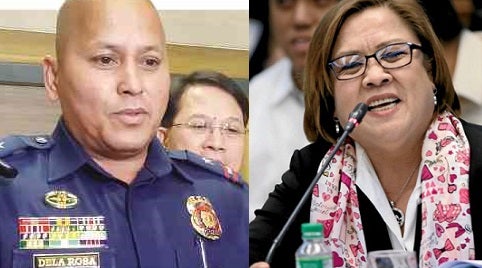 On her first night in detention in Camp Crame, Senator Leila de Lima was visited by PNP chief Director General Ronald “Bato” dela Rosa to assure her of her safety inside the police headquarters.

Fresh from his trip to Kalinga to visit relatives of policemen killed in an operation, Dela Rosa dropped by De Lima’s cell at the PNP Custodial Center on Friday night.

“She welcomed me and I talked to her. I told her, if security is your problem, you’re very secure here. You have nothing to worry about. You’re very safe here,” Dela Rosa told a press conference in Camp Crame Monday morning.

Dela Rosa said the senator, with whom he once had a clash during a Senate inquiry on  rampant drug killings, was “very relaxed.”

It was not clear if De Lima and Dela Rosa discussed why the police tried to arrest her on Thursday night despite her a public statement that she would surrender on Friday morning.

De Lima slammed Dela Rosa’s order to serve the warrant on the day the court issued it despite the agreement between Senate President Aquilino “Koko” Pimentel III and Interior Secretary Ismael “Mike” Sueño to allow De Lima to spend the night at the Senate.

De Lima said she did not want to be arrested at night for security concerns.

She was brought to the detention facility on Friday afternoon following her arrest at the Senate over illegal drug charges.

Friends of De Lima expressed concern over her security while she was put under police custody, citing the October killing of South Korean businessman Jee Ick-joo by rogue cops inside Crame.

De Lima’s fellow Liberal Party member Senator Francis “Kiko” Pangilinan questioned the capability of the PNP to secure detainees when it allowed Jee’s killing to happen inside the heavily-guarded camp.

But Dela Rosa said it’s normal for them to worry about the senator’s safety.

“But as far as the PNP is concerned, we make sure na safe na safe si Senator De Lima sa aming custodial center,” he said.

Phillipps said Robredo visited at about 7 p.m. Friday. It lasted for less than an hour. CBB/rga