Trillanes: Duterte wanted me dead thru an accident 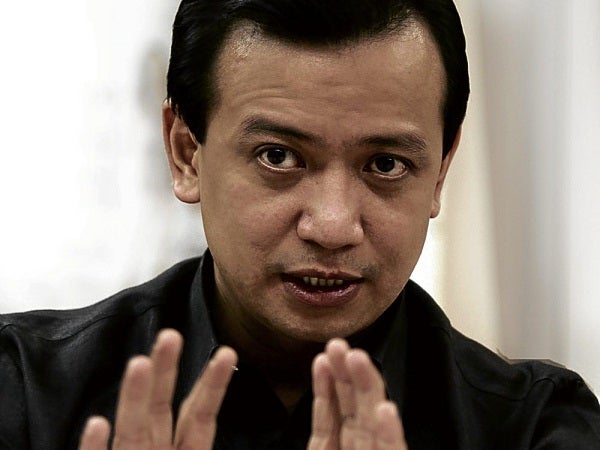 Sen. Antonio Trillanes IV on Sunday said President Duterte had wanted him dead since the latter won the presidency in May 2016.

Trillanes quoted confessed hit man SPO3 Arturo Lascañas, a former Davao City policeman, who said he had suggested to the President’s trusted aide that the killing be made to look like an accident.

The senator was reacting to a statement from Justice Secretary Vitaliano Aguirre II in a pro-Duterte rally in Luneta on Saturday that the government would go after him next to staunch presidential critic, Sen. Leila de Lima, who was arrested last week on drug charges and is now detained in Camp Crame.

Trillanes said he was actually the first on the hit list of Mr. Duterte.

“Actually, I was supposed to be the first [on the list] but they wanted me dead. They will not file cases against me but have me killed. Lascañas was told about this after Mr. Duterte won the presidency and it was because the latter was very angry at me. So they want to have me killed from the very start,” he said in a radio interview.

Contacted by phone, Trillanes gave more details of what Lascañas had told him when they first met. This was after the retired policeman had sought help from an emissary to reach out to the senator last January.

According to Trillanes, Lascañas told him that when Mr. Duterte won the election last year, he was approached by the latter’s trusted aide and driver, retired SPO4 Sonny Buenaventura.

“Lascañas was asked by Buenaventura what he thought about killing me because Duterte was very angry at me,” Trillanes told the Inquirer.

Trillanes has drawn the ire of the President after the senator revealed a few days before the May election that Mr. Duterte had P2 billion in his bank accounts. Mr. Duterte denied the charge but admitted he had a bank account in one of the branches of the bank that Trillanes had identified.

But Trillanes said Lascañas had told Buenaventura it would be difficult killing the senator.

“It was too big a project for them. They were used to killing small targets like petty criminals. If ever, their biggest target was Jun Pala,” the senator said.

Last week, Lascañas, who had come out to say he was a member of the Davao Death Squad under the control and pay of Mr. Duterte since he was mayor of Davao City, claimed he was among those who killed Pala, a hard-hitting radio anchor whose favorite subject was the President.

Trillanes said Lascañas had also told Buenaventura that killing the senator would result in a big backlash on the President.

“It’s because they know the investigation into my killing would be a tough one and some of those behind it might squeal, and that was why it would be difficult to accomplish,” Trillanes said.

And because he did not want to take on the job of killing Trillanes, Lascañas said that he made suggestions to Buenaventura that they make the killing look like an accident such as causing a truck to slam into Trillanes’ vehicle.

Trillanes said the retired policeman had told him that there were others that the Duterte administration wanted killed, which he would reveal more about when he testifies before the Senate on Thursday.