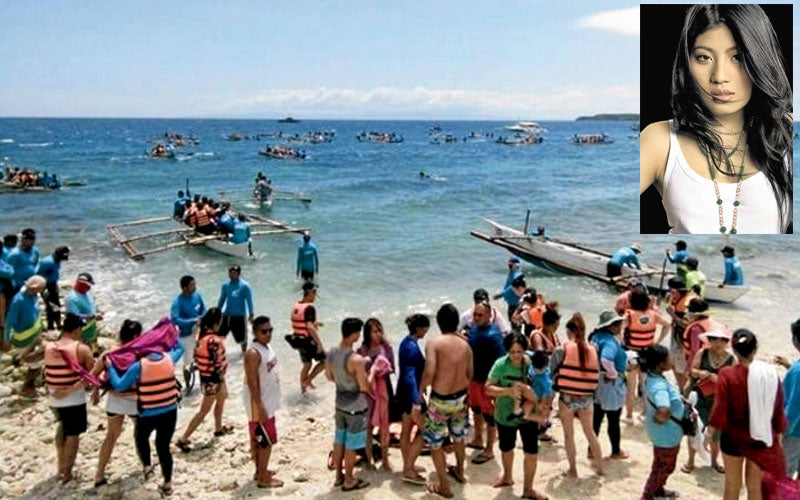 Villagers and visitors check out what the fuss is about after seeing an unusually big number of policemen in Oslob’s coastal area. The policemen turned out to be in the area to secure Thai Princess Sirivannavari Nariratana (inset) who went for a swim with whale sharks. —PHOTO FROM OSLOB POLICE AND PINTEREST

CEBU CITY—Tight security betrayed what would have been a private visit of a member of the Thai royal family in Oslob, a town 121 km south of here, which was made to fulfill a wish for a close encounter with whale sharks.

Princess Sirivannavari Nariratana of Thailand and her party arrived in Tan-awan village, Oslob, on Saturday for one purpose—to let her highness swim with whale sharks, which have made Oslob a key tourist destination in Cebu province.

The visit was unannounced, so residents were caught by surprise upon seeing tight security in the village.

No one was allowed to take pictures of the princess, said PO2 Jun Emar Jerusalem, desk officer of Oslob police station.

“Only a few tourists and residents knew about her visit because some of them were curious why there were many policemen present in the area,” Jerusalem said.

Oslob Mayor Jose Tumulak Jr. said in a phone interview that a member of the princess’ party met him two weeks ago about the planned visit.

“The advance party told the princess that our town is far away from the city but she insisted since she wanted to try (swimming with the whale sharks) and she loves diving,” Tumulak said.

Oslob, a fourth class municipality with an annual income of not more than P35 million, is more than three hours by bus from this city.

Tumulak said that on Thursday, another member of the advance party told him that the princess would push through with her trip.

The emissary, however, had not given him the schedule for security reasons, he added.

Jerusalem said Princess Nariratana and her party arrived in Oslob at 5:45 p.m.

She spent the night on Sumilon Island, one of the popular destinations in Oslob known for its white sandbar.

The next day, Princess Nariratana took her first swim with the whale sharks at 8 a.m. and her second, at 10 a.m.

Princess Nariratana and her party left Oslob past 2 p.m on the same day.

The princess’ visit came more than a month after five candidates of Miss Universe went to Oslob to swim with the whale sharks in December.

Their visit was criticized by environmentalists who said feeding and swimming with whale sharks were not sound environmental practices and should be stopped because it made the world’s largest fish dependent on being fed instead of hunting for their own food.

The pageant candidates’ visit was enough to further raise the popularity of Oslob as a whale shark destination.

He said tourist arrivals in the town declined last year as a result of a US travel advisory against visiting southern Cebu because of terror threats.

Tumulak, however, said Oslob remained safe for tourists. Referring to Thai tourists, he said “they will not be afraid to visit because even their princess was here.”