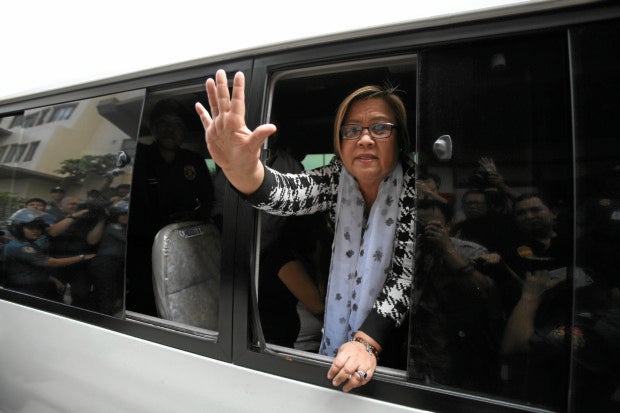 Sen. Leila de Lima is in high spirits but misses her furry dog.

She was upbeat as she received visitors at the Philippine National Police Custodial Center on Saturday, her first full day in detention on drug charges, which she had denounced as political persecution by President Rodrigo Duterte.

In a casual shirt and pants, De Lima cheerfully spent time with her visitors—members of her family, friends, her staff and other supporters, her media officer Ferdie Maglalang told the Inquirer.

“She laughed a lot. She’s in good spirits” but misses her favorite pet, Coco, a Japanese spitz, Maglalang said.

A dog lover, the senator has 13 different breeds, including chihuahuas, dachshunds, labradors, and jack russels.

Among her visitors on Saturday were Chito Gascon and Loretta Rosales, her successors as chairs of the Commission on Human Rights (CHR).

Gascon told ANC television that the detention guards initially refused to let him in as he was not on the approved list of people allowed by the PNP to visit De Lima.

He said the senator’s detention cell was “a little more comfortable” than a typical city jail. It was “small but not tiny” and has a receiving area and a separate toilet, he said.

Maglalang said she also has an electric fan.

Writing about her visit to the senator, Rosales called the detention cell “Leila’s Square,” which was “a small space big enough to hold caucuses and spiritual services.”

Her bathroom had a pail of water and a “tabo” or water scooper, she added.

“Leila looked refreshed, bright and smiling just after her bath, in an engaging yellow T-shirt that struck a soft balance against the green and white walls of Leila’s Square,” said Rosales, a former political detainee under dictator Ferdinand Marcos.

The former CHR chair said she felt “humbled” seeing De Lima expressing “her calm, her lightness of spirit, being at terms with herself and her God.”

“She expressed several times:  ‘I know I’m innocent, God knows I’m innocent. So there must really be a reason for all these,’” Rosales said.

De Lima spoke of her children and her parents “whom she idolized and missed so much at this moment of crisis for herself and the nation,” Rosales said.

He said that in addition to police guards, security officers from the Office of the Senate Sergeant-at-Arms were posted outside the custodial facility on rotating shifts.

“She was prepared for the worst scenario and the worst arrangement, so she’s OK,” he said.

De Lima told her staff that she would continue her legislative work in whatever way possible.

“She intends to file bills and resolutions. She hopes she can participate in committee hearings. We just don’t know how to do that yet. But she expressed that intent,” Maglalang said.

Fr. Robert Reyes, a close friend of De Lima’s, is set to hold mass in her cell on Sunday, Maglalang said. —WITH A REPORT FROM CYNTHIA D. BALANA