De Lima: I won’t be silenced 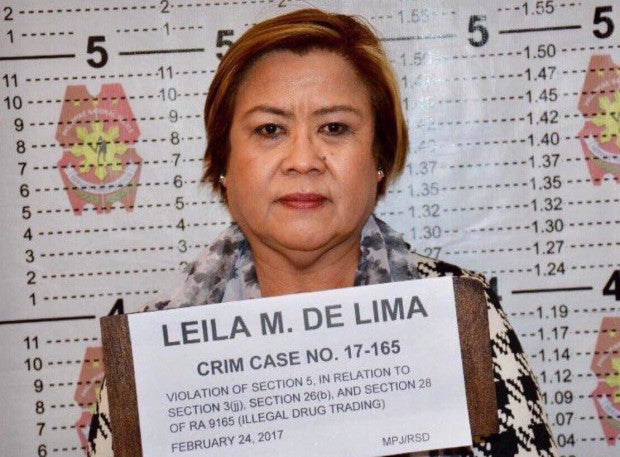 PROOF OF LIFE Mug shot of Sen. Leila de Lima taken during her booking at police headquarters in Camp Crame after her arrest on drug charges on Friday. FROM POLICE SOURCES

“If they think they can silence me, if they think I will no longer fight the fight I’ve been waging, especially for the truth, and the persecution of the Duterte regime, it is my honor to be jailed for what I am fighting for. Please just pray for me,” she told reporters as she was about to be handed over by Senate security to policemen who had waited all night with a warrant to arrest her on drug charges.

“These are all lies. The truth will come out and I will achieve justice. I am innocent,” she said.

“Fight, Leila!” relatives, friends and supporters shouted as De Lima made her way down from her fifth-floor office in the Senate building, and was put aboard a police coaster that would take her to Philippine National Police headquarters in Camp Crame, Quezon City, for booking.

It was just past 8 a.m. on Friday, two hours earlier than the handover time agreed between the Senate security and officers from the PNP Criminal Investigation and Detection Group, mother unit of the policemen who shot and killed execution-style a mayor detained on drug charges in a Leyte jail last Nov. 5.

De Lima, 57, was arrested Friday on drug trafficking charges she insisted were manufactured to silence her opposition to President Duterte’s brutal war on drugs, which has claimed the lives of more than 7,600 people in eight months.

Judge Juanita Guerrero of Muntinlupa City Regional Trial Court Branch 204, with whom De Lima, as justice secretary, tussled over a drug case in 2011, ordered the senator’s arrest on Thursday.

Dayan was arrested in his home in Urbiztondo, Pangasinan province, late Thursday. Ragos had asked for deferment of his arrest.

An hour after De Lima’s voluntary surrender, her office released a video message to her supporters and the nation, which her staff said was filmed on Wednesday in anticipation of her arrest.

In the video, the senator insists she is innocent of the drug charges.

“I have never betrayed and I will never betray the trust of my country and the Filipino people,” De Lima says, accusing the Duterte administration of making “an example of me to intimidate, silence and destroy anyone who dares challenge them, to draw public attention away from the government’s abuses and failures, and to cover up their most murderous war on drugs.”

“If they think [that] by jailing me, I will turn my back on my principles, they are mistaken. Instead, they have encouraged me more to pursue truth and justice,” she says.

The message contains scathing remarks about Mr. Duterte, whom she calls “the mastermind of the filing of cases against me.”

“The filing of criminal cases against me is only the fulfillment of Mr. Duterte’s fixation for revenge against me, because of my investigation of the Davao Death Squad when I was the chairwoman of the Commission on Human Rights,” she says, referring to the 2009 probe of extrajudicial killings in Davao during Mr. Duterte’s term as mayor of the city.

She says Mr. Duterte acts on a whim, which she calls “impunity,” and traces to his time as mayor of Davao, when he discovered that “he could kill without accountability.”

“Truth is, even though he has killed over 1,000 in Davao and over 7,000 throughout the Philippines with his death squads and rogue police, he has yet to pay for it under the law,” she says.

He will ‘pay soon’

But Mr. Duterte may soon pay for his “horrible crime against humanity,” she says, pointing to the emergence earlier this week of retired police officer Arturo Lascañas, a confessed hit man for the Davao liquidation team, who confirmed the existence of the hit squad and claimed the killings in the city were ordered by Mr. Duterte.

Lascañas disclosed his dealings with Mr. Duterte in a news conference in the Senate on Monday, confirming the testimony in a Senate inquiry last year by another confessed death squad hit man, Edgar Matobato, who said Mr. Duterte ordered the killings and shot dead a Department of Justice employee himself.

“With the revelation of Lascañas, there is no more doubt that our President is a murderer and a sociopathic serial killer. This is also the reason why we are experiencing all the madness in the government under this regime that is being led by the No. 1 criminal in the entire Philippines, if not in the whole world, none other than President Rodrigo Roa Duterte,” she says.

De Lima calls on Mr. Duterte to “stop the killings” and stop harassing her.

“Stop this madness,” she says.

De Lima will be detained in the PNP Custodial Center, where two former senators—Jinggoy Estrada and Bong Revilla Jr.—are detained while fighting plunder charges over the pork barrel scam.

Malacañang gave assurance that De Lima would be safe in detention.

He said De Lima would be “treated with fairness and accorded due process.” —WITH REPORTS FROM DJ YAP AND LEILA B. SALAVERRIA