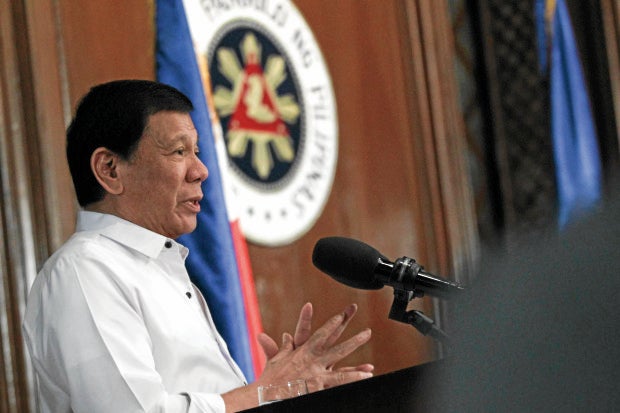 It’s going to be a tough job for members of the Bangsamoro Transition Commission (BTC) to draft a bill creating a new Bangsamoro region. But they should persevere through the obstacles and find the road to peace.

Duterte also called on Moro fighters to shun extremism, saying this would be a sure way to derail efforts to bring peace to conflict-ridden Mindanao.

“I’m urging the BTC to navigate the hindrances and obstructions and look for the path toward peace,” he said. “It’s going to be difficult. It’s a long journey.”

He would leave it up to the BTC because its members would know the history, the population, and the idiosyncrasies of the tribes in Mindanao, he said.

But he promised them full support for the Bangsamoro law.

“But where there is a product that is acceptable to all, you will see me, maybe in front of the Filipino nation,” he said. “I will ask every Filipino to vote for it because it will make us a great nation.”

Duterte, the country’s first president from Mindanao, said the country must have “peace at all cost.”

“But I would like to tell you now that as President, what I really want to happen is peace, but it must be one country, one nation, and one flag,” he said.

He also warned the Moro fighters against extremists who might get in their areas, and said this was why he was in a hurry to work for peace in Mindanao.

“If they come in here, as they are attempting to inject the Islamic State, that would be a problem,” he said.

If the fighting and violence should escalate because of this, peace efforts would be useless, he said.

“That is why also we must avoid extremism or even entertaining or even accommodating them, because it will destroy all of us,” he said. “This will be a country torn apart, because they are merciless.”

He said he had been trying to fast-track everything so that he could bring peace to Mindanao.

“I promised the Moro people of Mindanao that you will have it during my time,” he said.

His appeal to the BTC came shortly after the government’s peace talks with communist rebels collapsed.

He decided to scrap peace negotiations earlier this month after members of the New People’s Army ambushed and killed soldiers even before their declared unilateral ceasefire could take effect.

The President had also bucked earlier calls from the communist rebels for the government to free more political prisoners. He said he would want a bilateral ceasefire deal first before releasing more detainees. /atm