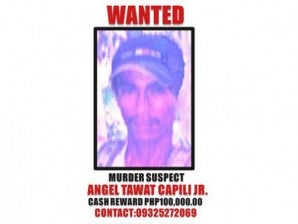 Although Angel Capili’s location has not been determined, Senior Superintendent Gilbert Cruz, Laguna provincial police director said that their tracker teams were still scouring Calabarzon for the suspect.

“As of now, our teams are still out searching for him,” he said.

Authorities have also spoken to Capili’s wife who said that her husband wanted to surrender,

Superintendent Kirby Kraft, San Pedro police chief, said that the suspect has not yet made contact to police.

“We do not know how he sent that message to his wife,” said Kraft.

Cruz said that they waited Wednesday night for confirmation of Capili’s surrender but no contact was made with police.

“But we know that he is still within Calabarzon, he has not left the area,” said Kraft.

Police also released a photo of the suspect and encouraged the public to contact the authorities if they have information which could lead to Capili’s arrest.

A P200,000 reward has been offered for information on the whereabouts of Capili.

Pempengco was stabbed dead while buying cigarettes at a store near his home in San Pedro, Laguna last Monday.