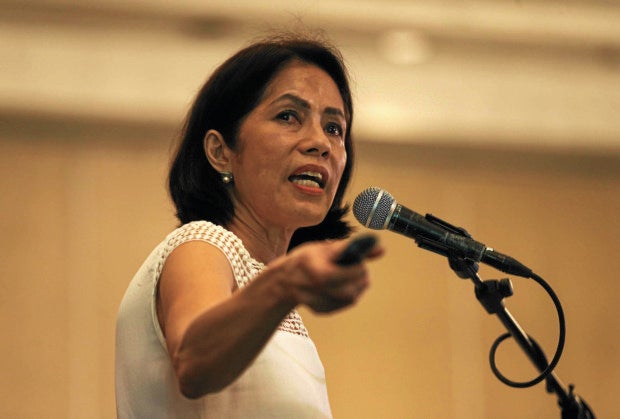 An embattled Environment Secretary Gina Lopez hit back at the Inquirer on Thursday for reporting “stories” of corruption that she admitted were just rumors, even as she urged the powerful Commission on Appointments (CA) to give her a chance to prove her worth.

A visibly upset Lopez hastily called a press conference to stress that she did not accuse any  CA member of being bribed to reject the confirmation of her appointment. The CA is scheduled to vote on her appointment on March 1.

The Chamber of Mines of the Philippines and a group of tribal chiefs from Mindanao were among those opposing her confirmation.

“There is no implication or accusation of any corruption here. It’s not fair for me to accuse anyone and I just heard stories,” Lopez said on Thursday.

The Inquirer reported earlier this week that Lopez told members of the Rotary Club of Makati of an alleged bribe offer of P50 million for every CA member  who would vote against her after she ordered the closure of 23 mines and the scrapping of 75 mining contracts.

She did not name names, and neither did she say where she got the information.

But she said then: “I was told every congressman was offered P50 million if they voted against me. Well, people talk. Let the dice fall where it may.”

In a turnaround, however, Lopez on Thursday admitted that she could not substantiate her claim, stressing that she made the allegation “casually.”

“I would never have said it in a press con, but since the Inquirer put that on (paper), it is unfairly implicating people who I have met at the Commission on Appointments who I know to be honest,” she said.

“I am not accusing anyone of corruption. I heard stories and there is no evidence at all. I said it casually and it was not appropriate for Inquirer to put it down as if it was an official statement. It’s not fair to the CA. It looks like they’re rocking the boat to make trouble,” she added.

Lopez said she did not mean to imply that any congressman was on the take “because there was just no evidence.”

“Why do you put that? The way they worded it it’s as if people are on the take. It’s not true at all. I play it clean. I don’t even accuse if there’s no evidence,” she continued.

Lopez, whose family owns the ABS-CBN media network, said she would not have mentioned the alleged bribe had she known there was a reporter around.

She also said she had her security detail beefed up, citing that the Philippines ranked second in the world where environmentalists were targeted.  She, however, has not received any threats, she added.

But two CA members criticized Lopez  on Thursday, accusing  her of sowing intrigue ahead of the confirmation hearing.

“It is the height of irresponsibility,” said Iloilo City Rep. Jerry Treñas, the assistant minority leader on the CA, a constitutional body composed of senators and House members with the power to approve or disapprove appointments made by the President.

“I was personally hurt by her statement,” Treñas told the Inquirer.

Isabela Rep. Rodolfo Albano III, the CA’s majority leader, said Lopez should name the people she claimed were involved in this “alleged attempted bribery” so they could face investigation.

Otherwise, she was just “merely engaging in innuendo and intrigues,” Albano said.

“Is that an example of how she will run the DENR (Department of Environment and Natural Resources) should she be confirmed?” he said.

Even so, environmentalists  led by Antonio Oposa Jr. and Sonia Mendoza of the Mother Earth Foundation expressed their “all-out support” for Lopez and called for her immediate confirmation. —WITH A REPORT FROM DJ YAP