Panelo to De Lima: ‘Real battle’ is in court, not in media 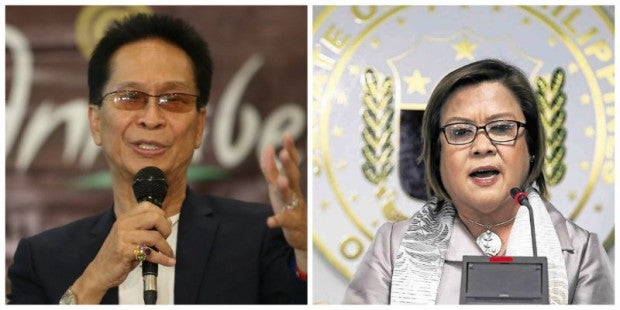 The “real battle” begins for Sen. Leila de Lima as she will now have the chance to prove herself innocent of the drug charges against her with the issuance of an arrest order against her, Malacañang said on Thursday.

“She should welcome this development herself as she is now given the opportunity to refute any and all allegations and/or evidence to be presented by the prosecution against her,” chief presidential legal counsel Salvador Panelo said in a statement.

“This is where the real battle begins and not in the media that she relishes to use against the President,” he added.

Panelo assured De Lima that the rule of law would prevail.

“The rule of law, as President Duterte keeps on harping every time he has the opportunity, must prevail,” Panelo said. “Unlike when she effected the arrest of former President GMA (Gloria Macapagal-Arroyo) despite the absence of a criminal charge and a warrant of arrest she will now be arrested and detained pursuant to a warrant of arrest issued by a competent court.”

“She is being given due process which she shamelessly denied FPGMA when she was secretary of justice,” he added.

The President’s lawyer said the “the law of karma has finally caught up with the senator in terms of being arrested and detained.”

“She, however, remains constitutionally presumed innocent until proven guilty beyond a reasonable doubt, a presumption she viciously denied the critics of the previous administration,” he said.

In a separate statement, presidential spokesperson Ernesto Abella said the senator would now have the “full opportunity” to defend herself in court.
“Senator de Lima will now have her day in court where she will have full opportunity to  prove her claim of innocence,” Abella said. /atm/rga
Read Next
Washed up carcass in Dinagat Islands believed to be of sea cow
EDITORS' PICK
Docs face ‘quandary’ as Sino vaccines’ arrival date set
3 things you need to know about your laundry detergent
PNP-PDEA gunfight: More questions than answers
JC Cares Foundation extends support to bloodletting program
Groups take turns marking Edsa revolt
Café-quality coffee at home with NESCAFÉ GOLD
MOST READ
PNP-PDEA gunfight: More questions than answers
Algieri warns Garcia: If Pacquiao puts you down, you’re not getting up
EXPLAINER: Legitimate children can use their mom’s surname — SC
Persida’s folly
Don't miss out on the latest news and information.