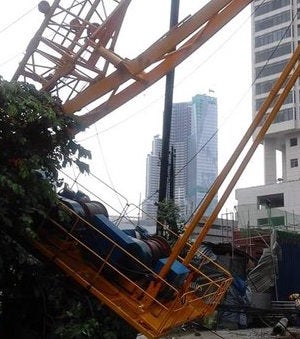 CEBU CITY — Work on a two-story mall along  Natalio Bacalso Avenue in Cebu City was halted on Thursday on orders of the Office of the Building Official (OBO) a day after a crane collapsed on four houses and injured a woman.

“In the meantime, I gave an order to suspend all the works until such time they will be able to explain, do something about the crane, and the affected areas,” she said in an interview.

Ylanan said OBO would find out whether or not MDBI committed some violations.

The crane of the ongoing mall construction collapsed past 8 p.m. on Wednesday.

Elenita Navasca, 32, was playing with her five-year-old niece inside their bedroom when she heard a huge thud and the lights suddenly turned off.

“Gibira dayon nako ang bata unya midagan mi. (I immediately grabbed the child from the bed and ran out of the room),” she said in an interview.

The incident was so quick that Navasca did not notice that her knee was wounded.

She was immediately brought by rescuers to the Cebu City Medical Center where her wound was stitched.

“Diha na ko nahadlok sa dihang nakita nako ang crane sulod sa among kuwarto pagbalik nako sa balay. (It was only when I returned home and saw the crane inside our room that I got afraid),” said Navasco, a technical support representative.

Her aunt Segundina Cavan, who owns the four houses that were damaged, appealed to MDBI to pay them for the damage which reached P1 million.

“Kalit kaayo ang panghitabo. Grabe ang among kakulba. Maayo na lang nga gipanalipdan mi sa Ginoo. Salamat Lord. (The accident happened so fast. We were so afraid of what happened. Good thing that the Lord protected us. Thank you Lord),” said Cavan who was outside their house when the crane collapsed.

At least 10 children who lived in the four houses damaged by the crane were watching television in one of the rooms that was spared from the accident.

Joseph Toreja, assistant engineer of MDBI, assured the affected families that they would take responsibility for the accident.

“We admit that what happened was an accident. We promise to shoulder the expenses and to pay for the damage incurred,” he said in an interview.  SFM/rga