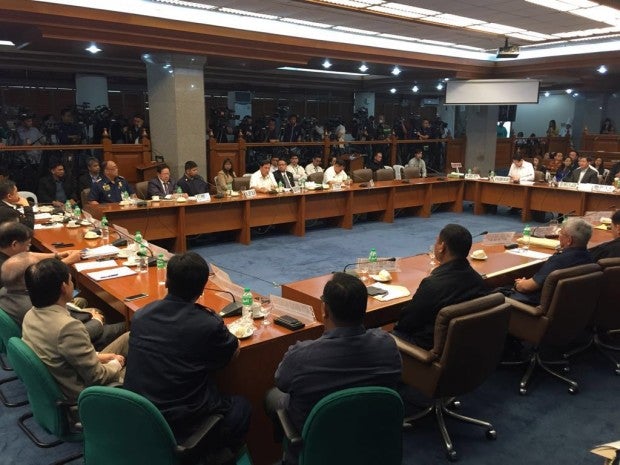 It only took a few seconds for SPO3 Ricky Sta. Isabel, using a steering wheel lock, to allegedly strangle and kill a Korean national right inside the Philippine National Police headquarters last October 18, a police officer claimed at a Senate hearing on Thursday.

“Parang ginarote (It was like he was garroted),” SPO4 Roy Villegas told the Senate committee on public order and dangerous drugs investigating the kidnap-slay of South Korean businessman Jee Ick-joo.

“Inilagay yung tali, isinuot yung bakal tapos inikot (They placed the cord, put the metal around him then twisted it),” Villegas, responding to queries of Senator Bam Aquino.

(Yes sir. It only took a quick moment. But I didn’t look, even the driver beside me didn’t look. At the first or second twist, I didn’t look anymore.)

Villegas said that aside from him, two other people witnessed how Sta. Isabel strangled the victim. He identified the two as Jerry Omlang, informant of the National Bureau of investigation, and an unidentified driver.

Appearing for the first time before the Senate probe, Villegas narrated in detail how they took Jee from his home in Angeles, Pampanga to Camp Crame in what he said he thought was a legitimate operation on October 18, 2016.

He said they were five, including Sta. Isabel, Omlang and a driver, and a certain “Pulis,” who took Jee and his house helper, Marissa Morquicho. The latter was freed later.

From the victim’s home, Villegas said they brought Jee to Camp Crame. Sta. Isabel, he said, was onboard his own vehicle, while he boarded another vehicle with Jee and the house help.

When they arrived at  Camp Crame, Villegas said he saw Police Superintendent Raphael Dumlao talking to Sta. Isabel. He said they could not hear what the two were talking about as they were told to stay inside the vehicle.

He said Omlang came and transferred the house help to a pick up vehicle.

From the PNP’s training service where they parked, Villegas said they were told to transfer to the Oval where he again saw Dumlao talking to Sta. Isabel. While at the Oval, three unidentified men came, and one of them became their new driver. He said the person who drove for them when they took the victims had left.

From the Oval, Villegas said the new driver took them back to the parking of the training service. It was there, he said, that Sta. Isabel came to them and gave them a plastic bag, containing surgical gloves and brown packaging tapes.

(It was handed to us, to me, at the door. We were told to wear the gloves… we had doubts and were afraid, even the driver beside me was becoming apprehensive.)

Villegas said Omlang showed up again and was ordered by Sta. Isabel to wrap Jee’s head with packaging tapes.

(There was four of us there… Jerry came in and wrapped Jee’s head… The victim was already having a hard time breathing.)

He said Omlang left and Sta. Isabel returned, carrying what appeared to be a steering wheel lock.

Villegas said he then heard Sta. Isabel telling this to Jee: “Do you know this?”

(He held the metal against Jee Ick-joo’s leg… it was dark inside but the metal seemed like it was steering wheel lock but I’m not sure. He put it on Jee’s neck.)

Villegas said he and the driver wanted to go out of the vehicle but they were stopped by Sta. Isabel.

(Ricky stopped us. We’re in this together, no one gets left behind.)

Villegas said he could not leave the scene because his gun was at Sta. Isabel’s car.

But Sta. Isabel, who was also at the hearing, denied Villegas’ allegation. He also reiterated that he was not part of the team that took the victims.